THE STRAY SHAR-PEIS OF OHIO CITY by Meghan Louise Wagner

Every party we went to in the summer of 1999 was lit up red. Red drapes fell over windows. Red vinyl chairs sat in kitchens next to red retro tables. Red walls vibrated with red Belle and Sebastian. Red wine gushed from boxes on countertops. Red signs glowed in dive bars. Red Schwinn bikes got stolen off our friends’ porches. Red hair dye spotted our shower mats. Red Chuck Taylors tapped in bathroom stalls.

We were only babies when we heard about the stray shar-peis of Ohio City. Mara, a thirty-something veteran of the scene who claimed to have once been a runway model in New York City, told us about them. She held court around a glass coffee table covered in ash trays and coffee mugs of merlot. A long, white Virginia Slim extended from her long white fingers. Smoke curled around her visage, giving her the sheen of a once faded runway model from New York City.

“They travel in a pack,” Mara said, “and roam the streets. They come out late, late at night. They only show themselves to the desperate, the lost, the delirious.”

We didn’t believe her. We laughed. We bombarded her with questions. Refutations. Challenges.

“They’d get eaten by other animals.”

“But where did they come from?”

Mara crumpled her Virginia Slim into the ashtray and we competed to light the next one for her. We held the flames of Bic lighters out to her and she kissed her cigarette to each of them as if she were anointing us. We basked in our own glow. We wanted to hear more. We didn’t believe her but we wanted more.

The truth, though, is that we forgot about the stray shar-peis of Ohio City. We stopped being babies out of a mixture of impatience and necessity. We got bus passes and coffee shop jobs. We sold plasma for beer money and rent. We left bars with the wrong men. We got stranded in the Flats and had to call friends from pay phones. We wiped blood from the backs of our boyfriends’ heads when they passed out on our living room floors. We begged our parents in the suburbs to just write another check. We broke down sobbing in brightly lit hot dog shops at three a.m. We screamed at each other from second story windows to come back inside and stay the night. We blew off work to feed our hangovers. We skipped classes to drink vodka and Sprites on backyard patios. We got called groupies and sluts and dumb-drunk-lushes. We borrowed our parents’ cars to drive each other to job interviews and abortions and airports. We shoplifted cigarettes and sugar-free Kool-Ade packets. We flirted with lazy eyed doormen to let us into five-dollar shows for free. We went out looking for madness. We went out looking for more.

It was a couple winters later. The sides of I-90 were covered in snow but the road was clear. The travel coffee mugs in our cars were filled with Black Velvet and Diet Coke. People used to mistake us for teetotalers at shows because we always carried those mugs.

“It’s so cool,” sensible men used to say, “that you don’t drink like all these other wasteoids.”

Inevitably, something we would say or do would shatter the illusion for them. We’d spray verbal venom mixed with cheap whiskey, trip on our high heels, try to make out with other girls’ boyfriends in basement bathrooms. We would earn our reputations.

But it was on one of those cold nights in the early 2000’s, when lavender clouds streaked the sky above the highway, that we sat at a stoplight on a side street in Ohio City near the I-90 on-ramp. We felt drunk and defeated from another night that didn’t go our way. We waited for the light to change, to be able to go back to our only comfortable state, which was in-motion. Onto the next thing. We needed something else because what we had was never going to be alright enough.

There were no other cars on the road. No reasons not to just go. The streetlamps cast an amber haze over the intersection. It felt like a cloak of invisibility. Because maybe that’s all we were this whole time. Invisible. We reached for our travel mugs, we cracked the windows, we lit our own cigarettes.

From the right hand side of the car, a brownish blob wiggled off the curb. We thought nothing of it. It was just some stray dog crossing the street.

We jerked our heads and saw four more wrinkled dogs, all tottering along. Their hides were tan and smooth, not chubby like regular household shar-peis. Their strong legs looked more like those of a pit-bull’s. They glided in a regal line and pranced over the snow crusted curb, glittering in the sodium glow of the highway entrance.

Green light flashed across the windshield. It was finally our turn to go.

But we sat. We sat and watched the stray shar-peis.

Meghan Louise Wagner is a writer based out of Cleveland, OH. She is currently a student in the NEOMFA. Her work has appeared in such places as Jellyfish Review, Umbrella Factory Magazine, and Minola Review. 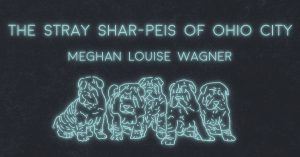