THE PULL by Ann Kathryn Kelly

I’ve felt the pull for years, to see what’s out there, how it differs from what I understand of the world. I’ve traveled distances to feed the pull. One destination, while still in the planning, thrilled me. Africa’s “Big Five” beckoned: lion, leopard, elephant, rhino, buffalo. I had my telephoto lens and a new bush hat—wide-brimmed, khaki-colored, with proper ventilation at the crown.

I pushed aside months of gripping headaches and growing fatigue, instead buying airfare, getting vaccinations. Nothing was going to sideline me.

“You have a cavernous angioma.”

I looked at the doctor in his white lab coat with black stitching over chest pocket. Whatever it was he’d said, all I needed, wanted, to know was what we could do to clear it up before my safari. His next sentence slammed my stomach into my shoes.

I looked at him, silent because I didn’t know what to say next. He looked back, silent because he was giving me the space I needed to realize my life had changed in that heartbeat.

I tried another surgeon, and another. I walked into each appointment with the hope I’d be told what I had was nothing to worry about, that the last doctor was mistaken, that I could get back to my life. Instead, they agreed I could not ignore it. I certainly could not fly. I could, they said, choose the date of my open-head surgery.

Scans showed my brain tumor was bleeding, causing the symptoms I’d been trying to downplay because they didn’t fit into my plans. Nonstop hiccupping, dry heaving, thunderous headaches, a paralysis that had started in my left foot and ankle. If the next bleed was severe enough, it might leave me with stroke-like deficits.

Trips, for years, had pulled me to places I wanted to see, taste, hear, learn about.

The goal? To come back richer, in some way, for having been there.

I was being pulled again, but that time to an experience far from savannas; to a place I knew nothing about, something malevolent at work inside my own head. A journey I never imagined I’d take.

The goal? To survive.

They got it all. After close to twelve hours of surgery, and three days before I’d have left for the safari I scrapped. It was benign, yet I return every two years for follow-up.

The pull returned a year after my surgery, to see what’s out there, what I might have missed were the outcome different. I remember, and mark, what I survived.

Standing feet from where it’s said Jesus Christ was laid after being taken from the cross, I remembered. Later that day, when I slipped a handwritten prayer into a crack at the Western Wall—penciled lines on a corner I’d torn from a sales receipt for coffee—I remembered. When I stood outside Istanbul’s Blue Mosque, breathing in call to evening prayer as it crackled from a minaret and bounced through the courtyard; and, again when I stood before the Taj Mahal, the Great Pyramids, the temples of Angor Wat. When I floated in the Dead Sea, crossed the Sahara desert by camel, trekked to the next waterfall in the Amazon rainforest.

I have a scar at the base of my skull. When I look in my bathroom mirror and bring another hand mirror to my neck, I see outlines of the staples used to close my head. Sometimes, I trace them.

When life’s minutiae interferes and I return to the belief that small frets are the big stuff, I touch and trace.

The pull persists. To see what’s out there.

To remind me of what’s good, right here, when I turn again the key to my front door.

Ann Kathryn Kelly lives and writes in New Hampshire’s Seacoast region. She’s an editor with Barren Magazine, works in the technology sector, and leads writing workshops for a nonprofit that offers therapeutic arts programming to people living with brain injury. Her essays have appeared in a number of literary journals. https://annkkelly.com 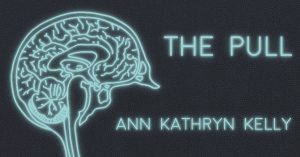