They were to meet at the Ben Bridge clock, as usual. Aaron arrived first, in his Spandau Ballet t-shirt and Levi’s ripped at both knees, last year’s ski-jacket, unzipped as it was a warm day. He stood smoking his Camel as a murder of boys came by. “Fag,” one of them called and they all laughed and looked over their shoulders and pointed and laughed again, and Aaron, he blew smoke from his nose.

He watched Matt approach from 4th Avenue. Matt, with his shoulder-length hair, in his Smiths t-shirt and paint-splattered cords and green Spiewak parka that was torn at the elbow where cotton batting stuck out. “Perfect,” thought Aaron, tossing the Camel butt to the curb.

Matt socked Aaron in the arm. “Look,” he said, pulling his own pack of Camels from his pocket. He opened the box and Aaron smiled at what he saw: the last cigarette in the pack, turned upside down. Matt took it out and lit it, inhaled deeply, held like it was pot, and then let out in a fluid stream. “Oh, that’s good. That’s really good. I’ve wanted a smoke all morning, but when I saw this was the only one left….” He passed the cigarette to Aaron who took his own drag as they began to walk, exchanging the cigarette after each hit. Matt took the last of it, down to the filter, right in front of the main entrance to Nordstrom.

“There’s our luck,” Matt grinned, flicking the butt to the curb.

Inside, they stopped and glanced right, glanced left, and then to each other with a look that was like a wink, and then headed to the up-escalator.

In the men’s department, Aaron went for the dress shirt section while Matt went for the polos. They were pros: they knew to give time to get noticed, to appear on the radar: picking up items, looking guiltily over their shoulders; it didn’t take long.

They arrived at the dressing rooms at the same time. Only one was available, so they went in together, which was better anyway, thought Aaron. Aaron hung his shirts on the hook and as he did, he accidentally brushed Matt’s arm, and then he brushed it again, not by accident. Matt placed his shirts on the bench and then in a motion as fluid as that morning’s smoke, he shifted around and took Aaron’s head in his hands and kissed him, hard: warm, tobacco-y, wet. Pulling back, each grinned: first Aaron, then Matt. “That’s another thing I wanted to do all morning.”

They zipped their coats up to their chins. Matt put up his hood.

They walked with intent: quick but not too quick. Down the down-escalator, through cosmetics and out onto Pine Street.

The man who nabbed them was meaty and sweating in an ill-fitted suit. He put a hand on each of their shoulders and they spun around to face him.

“Nice try, boys! You should know, that’s the oldest one in the book. Alright, off with them.”

The guard clucked his tongue. Passersby began stopping. The murder of boys jay-walked  to see what was up.

“You must think I’m a real fucking idiot, huh? Just some flunky security guard? That what you think, you little shits?”

“Take off your fucking coats ‘fore I rip them off your scrawny little bodies!”

Aaron and Matt looked at each other, earnest as hell, and then slowly lifted their hands to their necks, took hold of the zipper-pull and pulled, slowly, down.

The guard’s face turned rosy and then as he chewed for his words, he became crimson.  Aaron was certain he would have struck them if not for the crowd. Finally, his arm shot up and a trembling finger pointed to no place particular. “Go! Get the fuck out of my face. Now!” The boys turned and started away. They were all smiles. “And if I ever see you in here again, I will have you immediately arrested for trespassing! Immediately! Spoiled little Bellevue fucks!”

Matt turned and shouted back: “Mercer Island!” The guard lurched as if to pursue and Aaron and Matt broke into a run….

….all the way to I. Magnin, where the dressing rooms were larger and more luxurious and where, Aaron hoped, he might get more than just a kiss.

J. Edward Kruft has an MFA in fiction from Brooklyn College. He is a multiple Best Short Fictions nominee, and his stories have appeared inBack Patio Pressand MoonPark Review, among others, and he is editor-at-large at trampset. He was, indeed, at one time banned for life from Nordstrom. He’s not sure if that’s still being enforced. He lives with his husband, Mike, and their adopted Siberian Husky, Sasha, in Queens, NY and Sullivan County, NY. His recent fiction can be found on his Web site: www.jedwardkruft.com and he can be followed on twitter: @jedwardkruft. 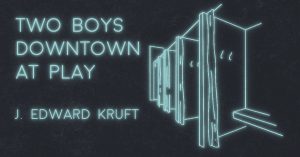 Read Next: MOTHERS by Melanie Czerwinski