Did you grow up near water? What did you think of when I asked that—lake, river, ocean, pool, other? Do you like to swim? Do you remember learning how? Did your grandmother live not on a lake, but near? Walking distance? Do you have fond memories of going to your grandmother’s house, getting one of the large towels she kept for you in the bathroom, one of the inner tubes she kept in her garage? Do you remember being little and using actual inner tubes on the water, not an inflatable pool float or tube like you might buy from Target or WalMart or Fred Meyer or Meijer or wherever, but an actual rubber doughnut made and perhaps even previously used as the inner part of a car or truck tire? Did you ever get in trouble for using her automatic garage door like a toy—hitting the button so it would retract up and then grabbing the metal lip at the bottom and letting it carry you up in the air, when you were still young and little enough for that to work? Have you ever looked at your own garage door and wondered how one could have ever had enough power to lift you floating up into the air while also at least a little bit wanting to try to again? Do you remember that short walk from your grandmother’s house to the public access trail to the lake? Remember the one house along the way that had rabbits and chickens and goats? Remember how the trail was pretty well hidden, snaking its way between two houses, two private properties, but it was supposed to be for everyone? Remember parents telling you that every lake has to be accessible to the public? Do you think that’s true? Did you still take it for granted that most everything your parents told you must be true, and so you didn’t question it, either the legality of such a claim nor the fact that the lake had a park with a beach and a roped off swim area and lifeguards and boat access a mile or two down the road, and so wouldn’t that count as the lake being accessible to the public? Do you remember the dock at this small beach—not the big one at the park, but the one that felt both public and private, almost like your own little personal beach on the lake? Remember swimming under it? How you could swim under but then come up and wade there, your head above water but under the deck, this little hidden foot or two that seemed like another world? Did you ever do this? Did you also, later in life, have a phase where you loved getting and hanging out on roofs? What do you think it is about certain stages of your life and being under or on top of things—pillow forts, caves, sitting on car hoods or tops, the roof of your house, your local church, school, whatever building had some combination of nearby fence or tree or other accessory that made it possible to get on top of? Have you ever been skinny dipping? Do you remember your first time? Was the idea yours or theirs? When you think of nightswimming, how much do you remember? Was it clear skies? Was the moon out? Have you revisited that lake as an adult? Parked at the end of the cul de sac, next to a “Public Property, No Access” sign right where the trailhead used to be? Did you sit in your car, listening to a playlist of songs from your youth and ask yourself questions about whether you should abide by the sign or not? What did you do next?

Aaron Burch is the Founding Editor of Hobart, and the author of the criticism-slash-memoir Stephen King’s The Body and the story collection Backswing. Other recent little cnf flash things have been published on Pidgeonholes, Jellyfish Review, and Bending Genres. He’s on Twitter @aaron__burch. 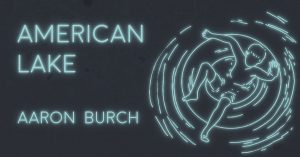 Read Next: OUT by Michael Lehman

x-r-a-y magazine
TWO BOYS DOWNTOWN AT PLAY by J. Edward Kruft
FOR OUR OWN PROTECTION by Kara Oakleaf