Whose Presence Joined With Ours Will Create Something Novel; A Review of Adam Soldofsky’s TELEPAPHONE by Evan Williams 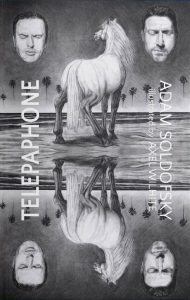 Take any version of the movie Freaky Friday. Now imagine it remade as a film noir. Now imagine it was written by Marshall McLuhan. Now imagine it isn’t afraid to lean into the philosophical implications a body swap has on the nature of selfhood. Congratulations, you’ve got Adam Soldofsky’s Telepaphone.

My first impulse upon reading the title was to rummage through my shelves for Mag Gabbert’s MINML POEMS, a book taking the torch of condensed wordplay from Aram Saroyan. The word “telepaphone” feels like it might fit in among Gabbert’s poems, sandwiched somewhere between “anammal” and “implocean.” While reading MINML POEMS I made a game of dissecting Gabbert’s pieces into their possible constitutive parts, beginning with the obvious combinations and extending outwards. What becomes clear in this practice is not only that the meaning of the poem can drastically change depending on its compositional permutation, but that the meaning of its individual components can be inflected in one direction or another by its partner(s); as one piece changes, so do the rest, so does the whole.

Motivational speaker Jim Rohn once argued that we are the average of the five people with whom we spend the most time. This idea supposes that our social surroundings construct us, though it elides, or, at minimum de-emphasizes our agency in the process. Our sense of self is not constructed for us, but by us, through and against those with whom we interact. Soldofsky approaches this idea, one of definition by inflection, and emphasizes not only the inflection itself, but its mode: the titular gadget, the telepaphone.

Described as “an amateur magician’s apparatus that, when worn by two individuals” might “facilitate telepathic communication,” the device is one that, on its face, allows for an intimate knowledge of another; it allows for a deeper, more genuine sort of inflective interaction.

The novella’s plot quickens when Adam Soldofsky—a failing-if-not-already-failed artist in a marriage brought to its deathbed by his alcoholism—and Axel Wilhite—an internationally-renowned artist with whom Adam attended art school—test the telepaphone. The machine’s instructions require the pair to sit facing with headsets “snug but unrestrictive,” set “about the crown of the head with the skull carapace sitting atop the head like a ballcap.” It’s worth noting that by this point in the book, the friendship between Adam and Axel is withering, if not spoiled. The meeting which has brought them to this moment was predicated upon Adam’s emotional decline, Axel visiting in the hopes of helping, or at least assessing its severity; the precipitant for the ensuing inflection of Axel on Adam, Adam on Axel, is one of imbalance. And, ultimately, a further imbalance is achieved: the telepaphone overshoots the mark, catapulting them past mere telepathy into a full blown body swap.

I won’t spoil the plot further but to say drama and dark hilarity ensues.

At the heart of any good body swap plot is the idea that having learned what another’s life is like, one walks away not only with greater appreciation for their own, but with an enlightened understanding of the daily hardship of their peer, and this is certainly true of Telepaphone. What is not common in the body swap genre, and what makes Soldofsky’s work so gripping conceptually and in its execution is its exploration of the leftover self, which borders on an assertion of an essential self.

What’s left of another person if your consciousness now resides within them? Their dreams, their muscle memory. Sporadically throughout the course of the story, Adam—in Axel’s body—falls asleep, launching into one of Axel’s dreams. When this happens, it’s not immediately clear in the text. Mostly, it is a seamless transition from Adam’s wakeful observations into his experience of Axel’s dreams, which he observes and comments upon as though he were outside of them. It’s in these moments that Telepaphone articulates most clearly the intimacy of a friendship—one brought on by despair, misfortune, and technological mishap. It’s tempting to argue that Soldofsky’s thesis is one aimed at touting the power of misery to bind.

This is the point from which the potency of Soldofksy’s novella stems. Snared in the logistics of the body swap is the surface-level but often obscured fact that a body swap is fundamentally the creation of two new lives. Further, if we construct ourselves against those around us, then not only does the body swap afford its participants the opportunity to construct a renewed sense of self against their swap-ee, but, disembodied, they might form it against themselves as well. Intimacy brings forth new form. It’s this that Soldofsky both fears and celebrates, the harrowing trials it may involve, and the selfishness we must break past to give over our whole being to another.

I took it upon myself to dissect the word telepaphone as I dissected Gabbert’s poems. Yes, it is most likely that the word is simply a combination of telepathy and phone, evoking the sound of the word telephone as an added bonus. However, mirroring the definition of the self and the social network in which it operates, the book takes on new meaning as its constitutive parts change. Having spent far too much time considering the contributions of an assortment of possible words based on telepaphone’s syllabic makeup, and even testing out a few acronyms, I came finally to two alternative possibilities:

I won’t decide between the two which is the right one, there is no wrong answer. If the first, Soldofsky has painted an elaborate portrait of our past—social, intellectual, emotional, etc—lives as being additives to not only our way of perceiving the world, but to our cellular composition. It is an articulation of the belief that that material is transmissible in a tangible fashion. If the second, then we need not worry. Body swap or not, there’s another we’re moving toward, another who will someday sit facing us, and whose presence joined with ours will create something novel.

Evan Williams studies at the University of Chicago where he writes about surrealism, the anthropocene, and masculinity. His work has appeared or is forthcoming in DIAGRAM, Pleiades, and Passages North, among others.

Read Next: A NONLINEAR PROCESS: ON CHANGE IN TAO LIN’s LEAVE SOCIETY by Alan Rossi