WITH NO. 27 by Gregg Williard

Specialist Hatfield had just finished No. 26.  Her boots thudded over the pine and plywood walkway, springy as a playground. Near the inside gate she hopped off onto sand and crushed coral, took a few steps and stopped  to jot something down on her clipboard and to check the bruises and blood on her knuckles. The two nearest perimeter guards saw a conscientious professional taking care of details. She kept her boonie hat down.  She worked hard and was up for promotion. She felt lucky to be at the camp, far away from combat duty. She followed the Army imperative: stay in your lane. Her lane was Mental Health Technician from the Wisconsin Reserves, assigned to an interrogation team. A wobbly Star Spangled Banner played over the P.A. and she stood at attention and saluted, the clipboard tucked in her armpit and getting damp.

The anthem finished and she again returned to her notes. Her hand moved the way a hand does when writing a brief afterthought of a note, but she had no afterthought and it was not a note, or even writing but a drawing of writing, not just scribbles but a cursive  pattern throwing shadows and a chiaroscuro forms across the page, straight up and down, rich with loops, dots, and scalloped peaks like a child’s depiction of ocean waves, the pen on paper sound of a distant sea, or trickle of sand.

The writing resembled Arabic. She’s learned to read a few words for road and warning signs. Maybe not so much Arabic as a code.

Her own writing was like this. When they did her personality profile they said straight up and down meant she was independent, not unfriendly but not exactly a people person either. Doesn’t socialize much. Prefers to keep to herself. They got it about right. Everybody was surprised she joined up. For crissake there’s easier ways to pay for school and, you’ll never have any time alone. Later on, of course, there were better reasons to call it a mistake.

Ahead was a long row of white plastic and metal boxes resembling porta potties. Their doors were numbered 1 through 30. The camp personnel had some fun imagining bungalows, playhouses, dog houses. They called this section of the camp The Bates Motel, The Roach Hotel, The Hood, The Kennels or, Dogtown. When she reached No. 27, she banged on the door twice with the flat of her hand. She opened the slot and said, “Sit down, turn around, don’t show face.” She slipped the clipboard under her arm, opened her velcroed left hip pocket and removed a gray cloth hood with a square breathing vent. She opened the opposite pocket and took out a black ski mask and pulled it over her head. She checked through the slot that 27 was sitting and turned with his back to her. She opened the door and in an affect-less monotone she recited, “We’re coming in if you turn around we kick your ass do you understand” and without waiting for 27’s mumbled “understand” she entered the cell and slipped the gray hood over his head. She cinched and locked the plastic cuff around the throat.

She sat and removed her mask. She said, “Turn. Tell me about Mustafa.” He turned and she watched his hood cave in and out with his breath.

“I don’t know any Mustafa.”

“Kabul. Mustafa. You met him at the bus stop. You went into the mountains with him. He took you to the camp. You learned about guns, explosives, tactics.”

“I don’t know this Mustafa. I never went to the mountains with Mustafa.”

“Tell me about Mustafa.”

“I tell you again, I don’t know any Mustafa.”

“Tell me about Mustafa.” She flipped pages in her notebook.

“I don’t know this Mustafa.”

Pages of doodles.  Flipping them helped create the appropriate interrogation atmosphere. Her mission was atmosphere.

“Tell me about Mustafa.”

“I don’t know this Mustafa.”

“Tell me about that Mustafa.”

“I don’t know this, that or any Mustafa!”

She flipped more pages. It was silent enough to hear the surf.

She said, “After my first tour I went home. One of my favorite things had always been trash picking. See, where I come from, there’s a university. A big one.  Back home every August 16th the students move out of their apartments. They throw out all their stuff.  On the sidewalk.”

“All kinds. Lamps, mirrors, tea pots. I even found a forty-gallon tropical fish tank, full of Convict Julies and Puffers.”

“My idea of heaven.”

“Convict Julies in Heaven.” He leaned forward. “Please. Take off the hood.”

“Anyway, that was the worst thing, because once you get in a combat zone the first thing you learn is…”

“Please, take off the hood.”

He slumped back against the wall and sighed.  After a few seconds the hood did an infinitesimal nod.

She said, “Once you get in a combat zone the first thing you learn is street trash might be wired with explosive devices.””

“The things Mustafa taught you how to make.”

“I was there in the beginning. The looting. Ancient Persian urns and Babylonian sculptures mixed in with beer cans and old tires. That’s how my patrol got messed up. We stopped to trash pick. Next thing I’m upside down in my vehicle. I remember sand pouring down on my arm. I was sent home.  Come August 16th, there it is: amazing retro kitchen table with sparkly red chairs, laminated table top with red boomerang pattern in perfect condition, and it’s right there, on the sidewalk, in the trash, right there. Home. ”

“And all I needed to do is stop my truck, open the back and put it in. Just take it.”

A spot of sweat or saliva grew from behind his hood. He said, “No more treasures. All right. I confess. It was Mustafa and me. We planted all the roadside bombs. We did 9-11. Now we are ready to detonate thousands of dirty bombs in all your infidel cities, starting with your home. Mustafa and I also claim responsibility for the secret assassination of President Bush, and his replacement with an Al-Quida impostor. Mustafa and I are ready to launch drones armed with magnetic pulse weapons over your key cities, destroying all internet and computer systems. Mustafa and I are also responsible for your hurricanes Katrina, Sandy, and Irene, which we artificially enhanced with our Secret Islamic Weather Weapons. Mustafa and I will also introduce anthrax into your school lunch programs, and a plague of nanorobots into your water supply, which will bond with the stomach linings of all overfed Americans and explode when combined with your fast food, creating a nation of surprise suicide bombers, martyrs to the Happy Meal. Are you getting all this?”

She took in the sound of her pen point scurrying, tapping, swooping across the page. She was getting all the facts, catching the full confession, the whole enchilada in graphic cavalcade: a report in dancing loops like old style school girl cursive, or the John Hancocks of narcissist Generals or Presidents or CEO’s, deadbeat dads on a bi-polar check-forging spree, or Arabic, beautiful Arabic, or the slosh of forty gallon tanks holding Convict Julies, their scurries in the algae mapped across her reporting form.

She released the cuff and took off the hood. She opened the door and he ran past her toward the fence. Beyond it was the shore and the waves. He staggered in the sand. His legs must have been weak from his long captivity. The perimeter guards barked commands to halt. They closed on him from three directions. She noted the time, their location, their rank, the tide. It was high. Coming in. 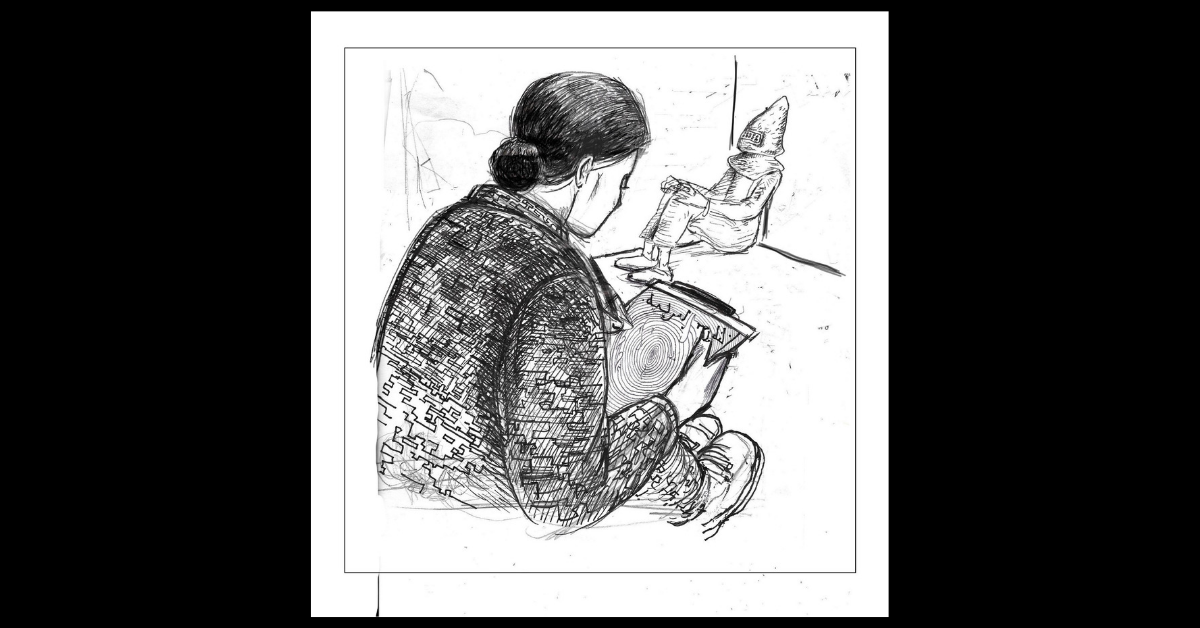 Read Next: THE CUPS by Jeff Phillips