A BIG JOKE ON ME: JP Vallières interviewed by Rebecca Gransden 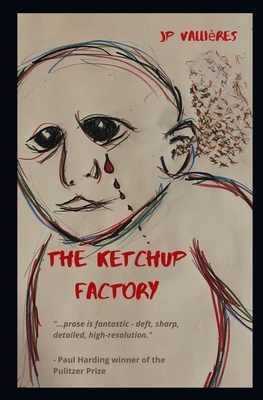 Anytown USA. People go about their day-to-day business as they always have. They visit a coffee shop, go to work, take a stroll in the town’s surrounding woods, have a string of puzzling sexual encounters, and perhaps go home to watch the town’s parade on television. JP Vallières inhabits a world of re-enchantment, but this magic has a mean bite. In his novel The Ketchup Factory the titular factory is the lifeblood of the town, providing employment for a significant percentage of its inhabitants. It also supplies the town with a special kind of sauce, and every resident is beholden to its nourishment. I spoke with JP about the book.

The idea of sacrifice features heavily in the novel. Why did you choose to address it? What is your relationship to sacrifice in your own life?

I remember watching (while writing) the scene where Michelle, the artist, is on the parade’s float painting the man bleeding on the cross. What a weird world, I thought. Blood sacrifices drifting by while families wave and smile. It was pretty easy to keep writing until the end.

Growing up I was taught that sacrificing oneself for another was the highest form of love. Who wouldn’t want to prove their love for the person they love most? But when a sacrificial act is religious (political/social) is it still a sacrifice?

Who are they sacrificing themselves for, exactly, and why? Are they bleeding out on behalf of the people or the system?

The world of The Ketchup Factory is one where citizens convince themselves that by dying on the cross they are not only contributing to the greater good, but will somehow be elevated to the highest political/religious status. How would you go about questioning someone who believes in this definition of sacrifice? That’s like saying, “Thank you for your service. Not!”

Nobody likes to be mean to the person who’s about to die for no good reason.

One aspect of the book that stands out strongly to me is the sense of place. The characters move between the industrial location of the factory and residences located on the outskirts of town in a rural setting. This contrast gives the world of the novel an almost mythic or fairytale quality. Are there places you’ve lived or visited you recognise in the environments used for the book? 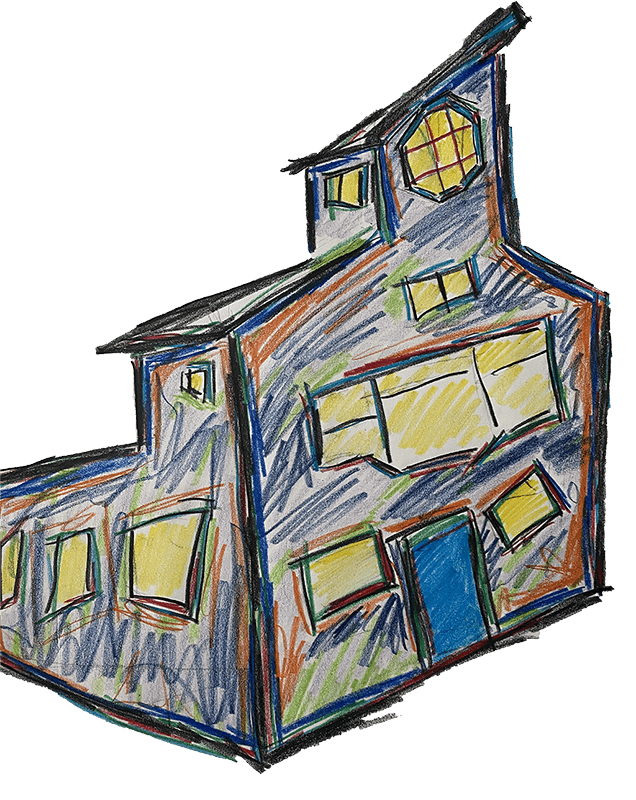 I grew up in the Village of Adams. In the center of town was an abandoned Fruit Of The Loom factory. There was a time when all the villagers would walk to the factory and make underwear for Americans. But the factory closed down during the time we stopped making things.

My generation threw rocks through the windows and imagined those olden times when all the parents had jobs.

The woods around Adams were magical. We were young and met there. We made fires at night. It was a place to drink and smoke and be happy. After all, we were so young and alive. Sometimes we’d jump right into the fire with both feet and singe off all our leg hairs.

Benji is the heart of the novel, and his character arc takes some unexpected and idiosyncratic turns. Could you talk about your intentions for the character and how you arrived at his final representation?

Benji either sees what others don’t, or his reality is separate from everyone else. There’s a strange moment where we begin to question the experiences Benji has had. Perhaps certain events never took place.

I made this discovery while writing the same as a reader would while reading. It just so happens that Benji’s experience mirrored my own reality with schizophrenia. The schizophrenic hears and sees what others don’t. Likewise, Benji believes his reality is true, while everyone else lives in a dark illusion.

The question I keep asking is where does Benji’s alternate world come from and why? It seems to arrive out of nowhere. I guess that’s what happened to me. I was a normal dude, going about his life, until, all of a sudden, I began hearing voices, hallucinating, and even feeling unseen hands on me. Most of my work thus far is an attempt to reconcile this troubling period of my life.

The story addresses the nature of artistic creation, mainly through the character of Michelle. Could you elaborate on your own approach to creativity? Do the musings on the creative process in the novel originate from, or mirror, your own experience?

I’m currently writing a novel about a guy named Junior who gets sucked into a black hole. His mother is dying of cancer. He’s in love with Rainy, but Rainy loves Charlie the vampire. My creative approach is following the story and characters. I hope Junior makes it out okay.

Michelle is very focused. She’s also very successful. Her success came so early. At some point after her success she had to become her own critic. Some famous folks can make crappy art and fool themselves that what they’re creating is great solely based on the money rolling in. But Michelle chooses to work through her slump and elevate her work through process and vision.

A striking aspect of the story is how horrific acts can become accepted, even mundane and welcome, parts of everyday life. How did you go about incorporating this aspect? Did you have a firm satirical approach in mind, or something more ambiguous?

I don’t see it as satirical. At least I’ve never thought of it that way. I wanted to directly address the unhealthy-majority’s mindset. Humans are survivalists. We’re really good at self-preservation. We can perfectly gauge when we’re on the brink of harm, whether it be physical, economical, or social. An insecure culture will do whatever they can to keep the status quo. Even horrific acts are conceivable when their existing state of affairs are in jeopardy.

The world of The Ketchup Factory is confined to its extreme intellectual limitations. People are discouraged to question or even acknowledge the choices their leaders make. It’s even forbidden to recognize the bloody bodies hanging there on crucifixes. There’s no outward fear or paranoia; actually, people are happy, comforted, grateful for the system in place.

It’s strange that the only character who is deemed “insane” is the one who seems to understand that everyone has been duped by the system. Anyway, who stops to listen to the schizophrenic crying out on the dirty street corner?

A different ketchup recipe precedes each chapter. How did you decide upon the placement and variation of the recipes, and which would you be most tempted to try yourself?

I wanted to have a different recipe to start each chapter. Kimmy, my wife, helped me with the ingredients. She added plum sauce and some more sophisticated spices. Side note: I’ve been known to “enhance” Kimmy’s originals by frying leftovers in a hot pan full of butter.

A consistent theme of the novel is the gravitation to a more natural state, whether it be the draw to live near or in wild places, or the embracing of an animalistic way of being. What was your intention when writing about nature? How does this aspect relate to the arc of the characters?

My regular life probably influences my writing. It makes sense to me. My characters are constantly finding themselves lost in the woods.

I live in northern Idaho. There are dark forests, lakes, wolves, moose, and bald eagles and ravens circling above. Grizzly bears, too. Once I was hiking on a trail and an owl landed in front of me and stared me down with its human-like face and eyes. And then it glided – aiming for my head – until it swerved, at the last moment.

Our local coffee shop has meetings with people who discuss their most recent Bigfoot sightings. I have not seen Bigfoot, yet, but I’m certain I will.

I once got lost on a rock climbing trip in Utah. After we finished climbing a thousand foot cliff we took the wrong ravine down and got turned around. That night we saw a helicopter circling us, searching with infra-red technology. They didn’t find us until we arrived at the trailhead where we met our wives and the local news crew.

Another time (and I’ll stop here), I forgot to wear sunglasses while hiking in Colorado. I got snow blindness and woke up the next morning with pus coming out my eyes. While lying in the tent the next day – worried to death I was blind for life – my friends kept imitating my whimpering, and laughing at me for being an idiot.

This is just a few instances of my life in nature. There seems to be a big joke, on me. 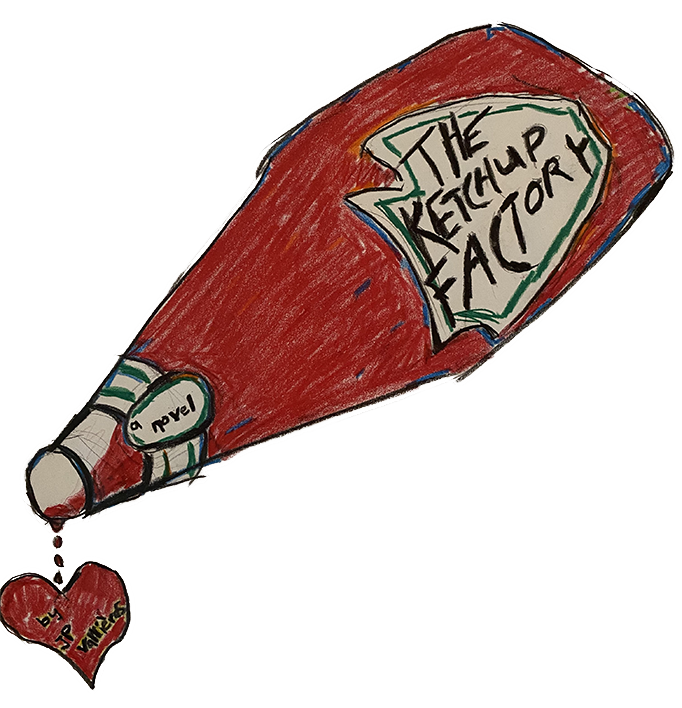 What is your favourite condiment? Conversely, if you could erase one condiment from history, which would it be?

Let’s get rid of mayonaise since it’s impossible to spell and makes no sense.

Are there films, tv shows, books, or music you associate with your time writing The Ketchup Factory? How long did it take to write from inception to final draft? What comes to mind when you recall the period of your life writing it?

Films: Fantastic Mr. Fox. Books: the ones written by Shirley Jackson and many others. Music: Dylan’s “I Want You”.

In 2019 it took me three months to write The Ketchup Factory. Then I wrote two more novels that year. Early in 2020 I returned to it and cut 20k words.

This was the first novel I had ever committed to. It was easy. Everything just flowed. All I had to do was sit, open the laptop, admit to myself, “I got nothing!”, and then begin.

JP Vallières is the author of the novel The Ketchup Factory. He lives with Kimmy and their four sons in northern Idaho. Find out more at https://jpvallieres.com/

Read Next: RAVI MANGLA on film with Rebecca Gransden