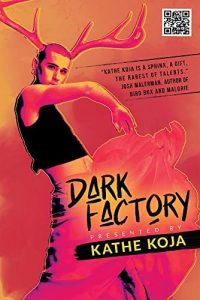 If anyone can be considered a psychonaut of literature it is Kathe Koja, a writer who utilizes prose to explore every altered state the page has to offer. With her latest project, Dark Factory, Koja enters the club scene, a place where mind-bending as old as licking a frog meets speed freak technology, and pagan archetypes dance with virtual avatars. I spoke with Koja about the sweet delirium of the project.

What attracted you to club culture for the world of Dark Factory?

Everything I write starts with a character, and for Dark Factory, it’s Ari Regon—smiling, hyper-alive, throwing sparks—and Ari brought the whole party along with him, including the club. And a club is very fertile ground for human behavior, good and bad, it’s a safe space and a potentially dangerous one. It’s where we go when we want to just let ourselves go.

Your writing is highly sensory and accelerated, a perfect fit for the themes of Dark Factory. Do you consider stylistic approach when preparing for each project, or is this more an instinctive process?

Completely instinctive. A project’s format—a piece of writing, a live event—might make different uses of it, but my work’s voice is consistent.

The world of Dark Factory is rich and highly textured. How did you approach research for the project?

There are so many moving parts—club culture, immersive makers, VR-adjacent tech, various religious mythologies, the business of art—and each one is its own rabbithole, so I had to dive in and keep going, keep following the branching turns, keep up.

The whole project was like that: it knew what it wanted to be from the jump, and once I stopped trying to cram all that research and material into a traditional, linear “novel”, everything got a lot easier—though it took awhile, more than a year, to get to that point, to understand what the material was actually about, and what it needed to be.

A main character in the book is the Dark Factory club itself. How did you go about creating it, and what are your own feelings towards it?

Thank you for saying that! Definitely the club is a character. And definitely a club can have a character, all the best ones do (think Berghain, for example, or your favorite spot, the one you walked into and said, this is for me). When a club’s really hitting all the marks, it becomes a truly liminal space, and you become limitless inside the music, the created atmosphere, the feeling that this is where you most want to be. Someone in Dark Factory says, It’s like the world if the world was perfect. That’s the goal.

The characters of Dark Factory are frequently decorated with masks. Could you talk about the significance of masks to the narrative?

Masks are signifiers of intent or philosophy, they’re borrowed personality, wearing one is hiding in plain sight: people feel freed with a mask on, liberated by anonymity, or absorbed into a tribe. The dancefloor avatars of Dark Factory are very much in that mode. And the horned mask kicks it all up another notch: Ari accepts the mask from a woman he tried to help in her creative endeavor, then it’s worn by Felix the DJ to totally blow up the party, and his own creativity, too; it’s seen as a symbol of sex for some people, a satanic symbol by others, it’s emulated and appropriated and made into art. It asks, What if a mask is its own energized space, is sacred space, in the sense of a mythos operating in real time?

A recurring theme is that of connectivity, iterations of which include: the connective bind of the Dark Factory club itself, connection made and missed between characters, mycelium networks, orgiastic happenings, and the interconnectivity of tech. What is the narrative significance of connectivity?

To highlight reality, because everything really is part of one big thing. There’s no meaningful organic separation between living things and their universal environment, everything exists in the same flow and flux—not in a wouldn’t that be wonderful? kind of way, but in a physics kind of way, a climate change kind of way, a karmic kind of way. Humans are the ones who insist that artificial boundaries are just as immutable as those laws of physics, and tailor their belief systems accordingly. And their behavior.

Tech is a dominant feature, especially in the realm of interactivity. Perception and experience of reality is modified by technology, and the borderline between traditional definitions of objective reality and the virtual sphere overlap and interrelate. The game of life intertwines with computer generated gaming. Could you elaborate on the role of technology in the book?

We like our tech. We’re ingenious in finding new uses for the things we’ve already made, and those things enable us to make still more new things. So is tech meant to be a toy, a tool, a lever? or all three? The people who come to the club to inhabit their shiny, sexy bespoke avatars, to dance and fuck the night away, are interacting on one level; the techs working on that augmented reality are on another; and the developers creating the games that lead to transformation are on another. How many levels are there? and are they necessarily hierarchal? The urge to transcend our human, body-based experience exists on all those levels. Is interaction with tech dependent on its functionality, or on ours?

Interactivity extends to the novel itself, where the reader is provided with links to bonus content, placed at suggested points in the narrative. Was this aspect present from the start or did the idea evolve over time?

It was definitely present, though I had no idea how to deploy it! Which is why that early period of What even is this? took so long. But once I got it into her hands, Tricia Reeks of Meerkat Press conceptualized the experience, with a very streamlined and engaging design for the print and ebook editions, to make sure people could enjoy the book at whatever depth of engagement they chose.

Which all leads into –

The world of Dark Factory widens into a multidisciplinary project, with a devoted website featuring immersive and multimedia content, and a varied online presence. What is your intention for the project as a whole?

—the overarching intent, which is to present immersive fiction, a story that operates just like life operates, in a constant rolling moment of creation and action and loss and memory and art, in the core story of this club, and everybody whose lives radiate around it and around each other, just like our lives radiate around one another, every day. And to offer people a way to play in this world, if they choose to.

One important aspect of the project is energy. When writing, or conceptualizing, did you use any methods to aid the mindset needed to sustain the desired energy for the project?

Loud techno, and sitting at my desk every single day.

How should I prepare for a night at Dark Factory, and what can I expect?

Expect to have fun, expect to be surprised, expect a dose of possible heartbreak and/or everlasting friendship. Expect to play along! Hydrate. Wear shoes you can dance in. Bonus if you like flowers. Bonus if you know where to get excellent espresso.

What tracks are essential to include on my Dark Factory playlist?

Oh the best question of all! And the hardest to answer. Here’s a (very) shortlist, to get you dressed and out the door:

Any advice for the morning after a Dark Factory experience?

Check to see what reality you currently inhabit. Check to see if you still have your shoes. Drink that espresso! And tell your friends.

Lastly, what would you want a reader to take away from the novel?

The indelible rush of fun. The urge to go make some fun yourself.

Kathe Koja writes novels, short fiction, and performance adaptations, and creates immersive events. Her work has won awards, been multiply translated, and optioned for film. Her newest immersive/fiction project is Dark Factory https://darkfactory.club/ She's based in Detroit and thinks globally.

Read Next: INTERVIEW WITH SAM PINK by Benjamin Scott