He bought flowers at the grocery store and put them in a wine bottle with a little water and an aspirin. He put them on the nightstand. There, for her, so the room wouldn’t smell of him.

He took the ingredients from the plastic bag that said, Thank You, Thank You, Thank You in red block font on the side. He took out the butcher block. He smashed, peeled, and chopped the garlic. He halved, skinned, sliced, and chopped the onions. He blinked, he blinked, he blinked. He put the onions in a bowl. He put the onion bowl where it wouldn’t bite his eyes. He quartered the brussels sprouts and put them in a bowl. He put the big pan on the range and swirled olive oil supposedly from Tuscany on it. He salted and peppered the steak. He ate a raw brussels leaf.

She didn’t arrive. From the kitchen, through the living room, he went. He sat on the bed. He took the flowers from the bottle and drank the aspirin and flower water. It didn’t really make him feel anything, but it was something different to do. It forced him to make a face. He’d found, but would never acknowledge, that he could do almost anything if he was alone and he stopped imagining somebody.

A little while later, he put the flowers back in a bottle with water, this time, for himself. 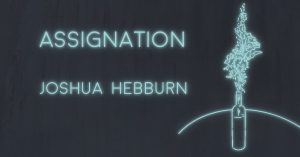 Read Next: AFTER SHRINKING by Hannah Cajandig-Taylor