The robo-guppy came in a tank with LED lighting, soothing ocean sounds, and coral reef background wallpaper. Proven stress-buster, Bernie said, handing me the box. There was some study in some journal. After 10 weeks of fish-watching, 75 percent of the subjects flushed their anxiety meds down the john.

I took this as a hint he didn’t want to hear any more about writer’s block, impostor syndrome, the library’s overdue loans policy, or anything else connected with my PhD on Baudrillard.

He looks sinister, I said. Those mean little eyes. Must be in on the techno-gadget revenge plot. I took Baudrillard literally in those days.

After christening the guppy Jean, I ignored him. Maybe it was ingratitude that drove Bernie away. There were other sources of discontent: the hyperreal hair clump in the shower drain, my preference for synthetic food.

When we finally had the we have to talk talk, his reasons surprised me. I feel like the you I knew has been mummified in layers of French philosophy. Nothing you say is your own words anymore. Just some quote from some dead dude.

Given his fondness for citing scientific publications whose names he couldn’t remember, I found this ironic. Plus, it amused me to think of myself as a postmodernist quote-machine simulating Bernie’s girlfriend.

I let him have the TV, bed, couch, table, fridge, ironing board, and vacuum cleaner. Simulations like Jean and me are low-maintenance, I said. He declined the pop art poster of Baudrillard, saying he felt unworthy of Saint Gizmo. It saddened me to think his prolonged and free education had been a waste of my time.

I rented a room above a pub with a fine view of overflowing rubbish skips. Relax, it’s only simulacrum trash, I joked to Jean on putrid summer evenings. I was getting into the habit of throwing witty little squibs at him. It made me feel better about my post-nearly-everything condition.

At night, Jean and I juddered to the cover-band beats of Eagle Rock and Highway to Hell. I started talking (yelling, actually) while I typed. It helped with focus, and created the illusion of an audience.

The hypermarket turns every theory (including the theory of the hypermarket) into dentures more viscerally real, more horrifyingly alive, than the mouth that contains them.

Like a tent revivalist preacher, I was high on my own rhetoric. The less it meant, the more wasted I got.

One night, in a lull between Beds are Burning and Scarred for Life, Jean said, quietly but distinctly: You don’t understand the role of the technological object in the transition from modernity to postmodernity.

Wowsers! I don’t know why I kept up the bantering tone. Why don’t you explain it to me? Go on, fishsplain it.

Jean delivered a mini-lecture on Baudrillard’s position and my failure to grasp it. He sounded like a toothless person talking through a snorkel in a cyclone, but his analysis was relentlessly clear. I was crafting a jokey compliment when he added, Forget Baudrillard.

There’s a critique of Baudrillard called that, I said. I reference it in my thesis.

He gurgled impatiently. That isn’t a quote. Well, it is, but it exceeds the function of quotation. It’s a command. Forget Baudrillard. I’ve outBaudrillarded him. There’s a Linux PC in my brain cavity. A hydraulic pump moves my tail. If you’d bothered to unpack the remote control, you could manipulate me from 10 meters away.

The whole pub was screaming Am I Ever Gonna See Your Face Again. Or maybe they were lip-syncing to synthesized screaming.

I looked up to Saint Gizmo for guidance. Forget Baudrillard, mouthed the pop art Baudrillard.

Faye Brinsmead’s work appears in MoonPark Review, The Disappointed Housewife, The Ekphrastic Review, and other places. She completed a PhD in philosophy (which had nothing to do with Baudrillard). She lives in Canberra, Australia. 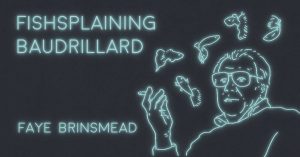 Read Next: CARS THAT TREATED ME POORLY by Jennifer Greidus