AT LEAST IT WASN’T ME by Andy Spain

George arches his back and reaches for the ceiling, fingers fully splayed in morning praise pose. His wife lumbers around him with a groggy scowl. “Great, gonna be late again,” she mumbles and bangs her leg on the bed frame, cursing softly as she clutches her shin.

George winces and edges past her. “At least it wasn’t me,” he thinks.

Strolling into the kitchen, George rubs his eyes and smiles at his two sons as they scurry around the breakfast table. The younger one waves hello, over-pouring milk into a glass. White cascades race down the cabinet edges and splash on the hardwood. The older boy bends over to help wipe it up and smacks his head on the edge of the counter, upending a dish of dry cat food as he staggers and collapses. He clutches his temples and whines softly.

George shakes his head and presses his palms to his face. “At least it wasn’t me,” he says, and zips up his windbreaker.

As he opens the front door, he sees his daughter drop to her knees on the lawn and scream, “Wait!” Her shoulders wrench with heavy sobs. A rust-streaked school bus putters down the street and rumbles around the corner. She twirls her backpack overhead and slings it at the house in a high arc. George chuckles as she stomps past, vigorously wiping tears from her cheeks.

“At least it wasn’t me,” he whispers.

Frank next door slams the hood of his sedan with both fists. The car sputters and lurches an inch backward, rocking gently. “Damn thing won’t move! Gears are stripped, maybe the transmission fluid’s low or something,” Frank shouts. “Like I have time for this in the morning.” He throws his hands up and kicks the bumper.

“At least it wasn’t me,” George says under his breath. The garage door hums open behind him and he steps to the side, waving to his wife as she reverses down the driveway. Dazed and distracted, she stomps the gas instead of the brake and blasts into the street. A hulking garbage truck plows into the driver’s side door in a screeching barrage of glass, steel, and smoke. The twisted wreckage whirligigs across the asphalt and wraps around a maple tree before barrel rolling down an embankment into a storm-water pond.

“At least it wasn’t me,” George says as he wipes his forehead and trots to the curb, whistling.

He scoops up the newspaper and flips it open. The front page headlines read “10,000 Dead, 20,000 Missing After Explosion” and “Poisoned Water Supply Responsible for Untold Calamity.” George closes his eyes and exhales sharply. Like a mantra, he repeats, “At least it wasn’t me. At least it wasn’t me.”

The garbage truck driver jumps out, chest heaving. He snaps his fingers at George and shouts, “Hey, buddy, you gotta—”

Frank’s car suddenly revs up and skids through the yard with a mechanical growl, clipping the garbage man and corkscrewing his legs underneath the rear wheel. Both ankles are shattered as he’s drug into the street. His jumpsuit, lacerated across the thigh, reveals shorn skin and pulpy flesh around exposed bone.

George hugs his arms to his chest. “Ooh, boy. At least it wasn’t me,” he says.

Neighbors stumble over their lawns to survey the damage, hands at mouths, bathrobes hanging loose. Dorris from across the street tiptoes to the sidewalk with a half-peeled banana in her hand. One glance at the garbage truck driver and she shields her eyes. George steps into the road waving both arms and calls out, “Hey, at least it wasn’t me!” just before an ambulance swerves to a squealing stop and pins him against Frank’s car. The siren blasts a single belated wail. George howls like an animal and paws at the grill.

An EMT appears at his side and kicks away some debris; another races to the stormwater pond. George looks down at his torso and grins feebly as he imagines hot butter smeared on toast. He caresses his cracked ribs and whimpers a mélange of unintelligible gibberish. The EMT tries to listen but discerns nothing. He lowers George to the ground and cradles his head.

I drift up from the body as it writhes and curls into a spent husk. The natural colors drain from the scene, rendering monochrome earth and desaturated clumps of blood and gristle. The chrome fenders blur and lose their shine; prolonged screams stretch further and diminish into a single resonance. The body’s final exhalation barely upsets two blades of grass.

As my silent and numb ascension accelerates, tugged upward or outward or elsewhere by a celestial summons, I take one last pitiless glance at the empty, ashen remains and think, “At least it wasn’t me.”

Andy Spain is a video editor and motion graphics designer living in the utopian city of Durham, NC, with his wife and four children. Or is it five? His humor writing has appeared in McSweeney’s Internet Tendency, Slackjaw, Weekly Humorist, and other humor sites. Find him adding nothing to the cultural zeitgeist on Twitter @citizenspain. 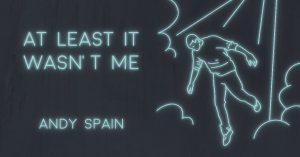