Boy finds Baby Dingo in the swell of the high noon heat. He waits for any signs of Adult Dingo, adjusting the too-big-for-his-head trucker cap. At home, Grandad is snoring heavy on the sofa.

Boy likes to wander off on weekends.

He wants to be a great adventurer.

Maybe today he is.

He checks his watch, surveys the dust bowl surroundings. The nowhere town below. Baby Dingo clambers across Boy’s lap and pushes its nose into the sweaty creases of his knees and armpits, licking the salt. There is no sign of Adult Dingo.

Boy pulls Baby Dingo up and holds it like he used to hold the stray cat that occasionally came by the house for food: face perched over the back of his shoulder, torso and hind legs buoyed in his arms. He twists himself over the wire mesh fence and ambles back to the house.

He keeps Baby Dingo in his room. It’s too hot for bed sheets so he sits Baby Dingo on the bare patterned mattress and strokes its soft tail.

Despite waking as Boy returned, Grandad is none the wiser. It might be on account of the fact that Grandad is old. Older than Boy. Boy had only learnt to count as high as Grandad’s age in winter. Even now, Boy has to concentrate to make it to such a number.

When Grandad calls for him through the walls to go and fetch some milk and bread from the store, Boy asks Baby Dingo to stay put. He whispers it right into Baby Dingo’s ear and presses a kiss to the top of its head. Baby Dingo tastes of sand and sun.

On the way back from the store, Boy spots dead Adult Dingo by the side of the road. He runs home so fast that his knees shake and his feet stumble.

He decides not to tell Baby Dingo. He thinks Baby Dingo might already know.

Boy introduces Grandad to Baby Dingo by accident. Boy is in the bath. A cold bath. A bath to keep the heat at bay.

Grandad disappears outside to talk to the stones, so Boy sneaks Baby Dingo into the bathroom. Baby Dingo sits on the toilet seat and laps up the bath water. Boy doesn’t hear Grandad return, not until Grandad has opened the bathroom door to tell him not to be long because food will be ready soon. Baby Dingo jumps from the toilet seat and scuttles back to Boy’s bedroom. “Was that a dingo?” Grandad asks. Boy confirms that it was Baby Dingo, his new friend.  Boy asks Grandad if Baby Dingo can stay. He tells Grandad Baby Dingo has already been here for a week. After a long pause and a chin scratch Grandad says yes. “As long as Baby Dingo doesn’t chew the sofa.”

Boy takes Baby Dingo to school. There are questions. The teacher asks Boy to bring Baby Dingo only on Fridays. Show-and-Tell day. Baby Dingo can wait at home otherwise.

A few of the Children ask why Boy has Baby Dingo. One of the Children, The Bully, says that Boy shouldn’t be allowed Baby Dingo, because everything he’s looked after so far has died. He says Boy isn’t very good at it. “Your crazy-brain Mum is dead, and now she’s just stones in your back garden. Just stones your Grandad talks to.”

They should be sleeping, but the night is too sticky. Boy rolls over to Baby Dingo and stares deep into its open glassy eyes. He whispers, “Baby Dingo, I love you.”

Grandad asks if it’s time Boy spoke to the stones. It’s been seven months since Mum died. Boy has never talked to the stones. Boy is scared because he knows there’s nothing they can say. Boy is young and naïve and innocent, but Boy is aware. The stones are Mum’s resting place. He knows the only words they’ll ever have are the ones she has already spoken.

Baby Dingo goes with him. Grandad too. They sit, and Grandad starts talking. Boy is mute, at first. Grandad says that maybe he should tell the stones about Baby Dingo. Boy talks so much his mouth dries to a desert.

The Earth navigates its path around the Sun and Baby Dingo gets bigger—tail longer and teeth sharper, though Boy has never seen Baby Dingo bite.

Boy says that Baby Dingo can do that with him, can’t he?

Baby Dingo has been gone for three days. Baby Dingo isn’t a baby anymore. Boy cries in bed and then into Grandad’s chest as he holds him in his arms. Grandad says Baby Dingo will come back. He says he’s as sure about that as he’s ever been about anything. Then Grandad takes a breath and pulls Boy up so they can see into each other’s eyes.

He speaks slow and says that sometimes, even when it’s the hardest thing to do, “Sometimes you gotta let the things you love roam wild. Not because they don’t love you, or they don’t want to stay, but because they need to see something of their own.”

Boy blinks back a tear.

On the ridge of nowhere town, there’s a spot that only Boy—now Man—knows. There’s no marker in the ground. No definitive coordinates to frame it. There’s no need.

At dawn, Man adjusts the too-small-for-his-head trucker cap and smiles as he passes the two sets of stones. The sun is ripe to stifle. A little further, and Man twists himself over the wire fencing, careful not to snag his skin on the metal. He strolls across the sand and up the esker. He checks his watch as he reaches the spot. The view from the ridge spans wide and long, a chasm of red dust an open road.

“Hello, friend,” Man says, watching the semi-circle top of the sun shuffle onto the horizon. Adult Dingo might say it back.

Emily Harrison uses writing as an escape from reality and doesn’t drink enough water. She has had work published with Barren Magazine, Gone Lawn, Ellipsis Zine, Storgy, The Molotov Cocktail, Retreat West and Riggwelter Press to name a few. She can be found on Twitter at @emily__harrison. 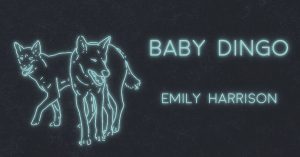 Read Next: SATURDAY NIGHT BLUES, OR THAT ONE TIME FRANNY TOOK PATRICE OUT by Bob Raymonda