I was a thing among other things in the hazy scene of his bedroom after shotgunning a beer for the first time. I remember the red pocket knife and the aluminum bending into itself to make room for the blade so that the hole I pressed my mouth to was an inverted flower. I remember finishing first. I remember finding his room and collapsing on the bed in the wrong direction, my legs where his head would go, my bare feet propped against the wall on the bottom of a poster for an alien movie I’d never seen, my toes covering the names of producers and directors. I thought of the game we had played earlier that night of Never Have I Ever. Never have I ever sucked someone off. Never have I ever seen this alien movie. Never have I ever been so dizzy. I closed my eyes and went elsewhere, to the last time it felt good to be wild.

In creek water up to our knees, she lifted a two and a half foot carp with her hands. She scooped it into the bed of her forearms, held it like a baby in a tantrum, then tossed it onto land where it flopped convulsively to death. Usually, every spawning season, we killed them with pitchforks our dad provided (invasive mud-suckers, he muttered), but that year there were so many of them you could practically cross from one side to the next walking on the slimy brown backs of them, so we rested our bloodied tools on the rocky bank and went straight in. I tried to follow her lead, as little sisters often do, but I kept lunging at the water and coming up holding air. She mocked me, as big sisters often do, saying I looked like I was trying to make out with myself. She turned her back to me, wrapped her wet arms all the way around her torso, becoming two people suddenly instead of one, moaning, mmmm, yes, mmm. She grabbed a fistful of her own hair, the other hand reaching hopefully for the pocket of her jeans.

Disgusting, I told her.

Like I’d want to, I shot back, as again I thrust myself into the water and came up with nothing.

Then we went back to spearing them. You had to get one at an angle in the gut, and when you did, they lashed out in every direction. The wooden handle became alive with the fight of them. It was a deep vibration, like the time the boy down the road dared me to touch the electric fence, but a reversed feeling, like this time I was the fence.

Then we sat on the rocks taking count. Eight mud-suckers scattered about us.

She said, kissing is like swimming forever but never getting tired.

I said, gross. I meant how did it feel to catch one like that? To hold it?

She shrugged. I guess it felt good? Or whatever? And why do you care? She cupped her face in her hands with one scale the size of a penny stuck fluttering on a knuckle, a translucent white flag.

Looking dreamily across the creek to the pasture of dairy cows she said, last night, Jeremy kissed me with tongue. It was weird and wet but good, like the movies.

I told her, I can imagine.

Years after the creek day, weeks after the shotgun night, our dad kicked me out at the age of not even old enough to drive for the crime of useless slut what were you thinking. My sister stopped me mid-manic-bag-packing as I was wondering what does a girl even need, really need, to leave and keep going (a jacket, a bus ticket, a reason), held my bruised cheek in her palm and said, he’s dead to us, then followed me down the long dirt driveway.

Isabelle Correa is from Washington and lives in Vietnam. Her writing can be found in Trampset, Maudlin House, Third Point Press, and is forthcoming in Drunk Monkeys and Pank. Follow her on Twitter and say hello @IsabelleJCorrea. 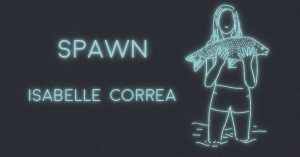 Read Next: A WANTED WOMAN by Paul Beckman