I slide the glass racks to the side and peer into the dish pit where Bones struggles mightily to scrape the charred remnants of bread pudding from a hotel pan.

“Bones, how are you holding up?”

“Let me know if you get overwhelmed.”

Bones is pushing seventy. He’s worked the dish pit at the country club for seven years. When he can escape the pit, Bones sweeps by the dumpster or deep cleans the upstairs banquet kitchen—tasks that take him far from the watchful eye of Executive Chef, Craig.

I discovered the nickname Bones came from his high school running back days. Bones because he was hard as bones. He received a scholarship to Auburn but blew out his knee. I could still see the running back in him.

When I pass Bones later in the afternoon, he’s on one knee scrubbing a drain by the walk-in cooler. I enter Chef Craig’s office. He swivels in his chair.

“I watched him clean a pot for twenty minutes earlier,” Chef says. “He thinks he’s clever.”

“Feel free to fire him.”

“He’s your responsibility. Now get started on those stocks.”

To make beef stock, I toss oven-roasted veal bones in a tilt-kettle with onions, peppers and spices. To make crawfish stock, I retrieve a sack of live crawfish from the walk-in. Their tiny claws pinch at the sack’s purple netting. I place the sack in a deep sink and fill it with cold water to purge the crawfish.

After adding the trinity (onions, peppers, celery), I pour in the purged crawfish and crush them with an electric mixer. I can’t watch them change from living creature to mush. I always look away. When what remains resembles a reddish batter, I fill the tilt-kettle with water and crank it to high.

Ally is asleep upstairs when I get home. When we met, I was finishing culinary and she was two years into med school. I studied days and worked nights. Now we only spend nights together when she stays up to watch our shows or when things align “for us to try.” Ally says we can’t wait to have kids. Her orthopedic work with elderly patients has exposed how quickly we degrade.

I pour a scotch and go to the patio for a cigarette. Smoke rises toward our bedroom window. Ally’s beside lamp turns on, and I follow her path to the bathroom where she flips on the light. My phone buzzes.

Yeah. Grabbing a drink after.

I slide onto a stool at Molotov and order a Sazerac. I watch Kelly tend her tables. On her way to the kitchen, she’s stopped by an older gentleman at the bar. He’s been coming in a lot lately. Always the same stool, always a Vieux Carre. Kelly’s face flushes. She places her hand on his arm and continues. Noticing me, she mouths, “twenty minutes.”

The sign for the Hotel Monteleone bathes Kelly’s living room in red light. I sip scotch and stare out the window at the Quarter below. Kelly emerges from her bedroom wearing pajamas.

I point to a glass on the coffee table.

She lands on the couch and reaches for the glass.

“He graduated high school before you were born.”

Kelly grabs a joint from a cigar box on the table and lights it.

“Ally came in the other day,” Kelly says. “I recognized her from your Facebook.”

I crack the window. A drunk couple stumbles through the bloom of a streetlight.

“You shouldn’t smoke in here.”

“No recognition whatsoever,” she continues. “I guess you’ve wiped me from your social media footprint entirely.”

I take a seat beside her on the couch.

“Dylan’s doing well at school,” she says, inching closer. “They’re studying human anatomy. I bought him one of those life-sized wall-hanging skeletons with Velcro bones and organs he can place where they’re supposed to go.”

“You’re still getting along okay with five hundred a month?”

“I told you I can’t take being introduced as ‘mommy’s friend’ anymore,” I say. “He’s getting older. Things will start to click soon.”

“I never wanted it to be this way,” she says. “It would crush Ally, remember?”

She straddles me and starts unbuttoning my shirt.

“But you just can’t stop coming over, can you?”

Before going home, I peek in Dylan’s room. He’s curled up in a pool of moonlight shining through the window. He-Man and Skeletor do battle on his pajamas. I can see both of us in his features, but he will only see his mother’s. Hanging on the closet door is the skeleton. The bones and organs are perfectly placed except for the heart, which is too high, practically in the skeleton’s throat.

The next day, after a hellish lunch rush, I’m drawn by a fracas from the dish pit. Bones is sprawled on the ground holding his chest. I hold his hand and comfort him until the EMTs arrive, place an oxygen mask over his face and take him away.

I drop the beef and crawfish stocks through a China cap into five-gallon buckets so nothing solid enters the liquids. Once the stocks are dropped, only the bones remain. We receive them as bones and dispose of them the same. In between, we suck everything we can from them. With a metal paddle, I scrape the remnants into plastic Lexan containers then spray the kettle clean. I hoist the containers onto a cart and push it outside where I toss the bones in the dumpster.

Wilson Koewing is a writer from South Carolina. He received an MFA in creative writing from The University of New Orleans. He lives in Denver, Colorado. He has work forthcoming in Pembroke Magazine, The Running Wild Press Short Story Anthology and New Pop Lit. He was a November 2019 resident at The Vermont Studio Center. 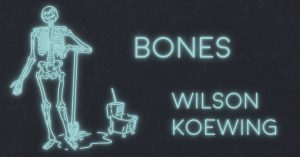