Look at a man’s shoes, would you look? You can tell a lot, they say. People look at your feet and see the left toe of your boot scuffed black and they don’t know that you do it for the wind, man. That you kick the shift up, up, up, man, you kick it. And for what?

And people don’t understand when the work gets slow and the money gets less and you can pick only one, man. You live in a place where the leaves change colors and the snow falls and you sell the one with heated seats and keep the one with half as many wheels. For what? That’s what they say and you just smile back and tell them you plan to take the bus.

They look at you like you’ve got a mental disability, man.

The snow turns to slush and the slush turns to rain and the rain turns to sun and people waiting in line at the bus stop go from boots to running shoes to socks-in-sandals to just sandals. You give your cousin a call and he says he’s at work but the garage isn’t locked, man, and you open your cousin’s garage and take the greased bedsheet and throw it to the floor and sit on the tattered seat and grip the bars and lift the steel with your legs, man. You lift it.

Then you grow your hair a little too long and you ride through the country and you scare the cows and you race the horses and the whole time you’re thinking about how you don’t get what people don’t get. They look at you all confused, man, and they always say to ride safe and wear your helmet and ask if you’ve signed up as an organ donor yet.

So you swipe right one day and she swipes right and her profile says that she teaches kindergarten classes and you ask her if she’d like to meet up for coffee and she looks through your profile and says yes. She says yes, man. And you’re drinking orange pekoe, man, when you tell her you were only half-truthful that you owned a car and she smiles a fake smile and looks at her hands for a while.

But she doesn’t leave, man.

But you’re just the notch because she doesn’t call you back and she even blocks your number, man. She blocks it. Now she can make her father angry and she can wear a Harley Davidson T-shirt around her friends and wait for them to mention it so she can tell them about the time she dug her nails into a man with long hair—that’s you, man.

Now the road is lonely and the air bites and the leaves fall down, down man, they fall and your cousin calls to ask if you need to use his garage again.

Your phone is buzzing and you’re thinking it’s your cousin when you should be thinking about some important information that was told to you by your motorcycle instructor when you were seventeen. When your instructor stood in front of a chalkboard and said, “Hey gang, how’s everyone doing today? We’ll break in an hour, for about an hour, and there’s a sandwich place across the street just so you know. But first, let’s talk about something that’s so important, gang. Let me see a show of hands on who can tell me how many beers you can have before riding? How many beers, gang? The real answer is zero, gang. Zero beers, because a motorbike isn’t like a car or a truck, gang, there’s no seatbelts or airbags and requires your full attention.”

It requires your full attention, man.

Somewhere there’s an instructor who’s telling his class how your body painted a line on the road like red chalk. You wish he was telling them how you did it for the wind, man, but he’s not. He’s showing your helmet, how it’s worn flat on one side like lipstick, how if you hadn’t been wearing it your head would have looked like the perfect cross-section of the human brain that you see in textbooks. He’s blaming you for the increase in his motorcycle insurance.

R.J. Patteson is an author/screenwriter from Toronto and finalist for the Academy Nicholl Fellowship. His other stories can be seen in Ghost Parachute, MoonPark Review, and Animal: A Beast of a Literary Magazine. He tweets @rjpatteson. 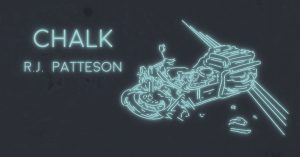 Read Next: ANALOGUE by Sara Kachelman