The concrete slab lies resting at the centre of a clear perspex bowl that had until just now been full to the brim of cake mixture, a potential Victoria sponge whose life is suddenly cut short. As of mere seconds ago, the sugar, eggs, flour, and butter are splattered all over the tabletop and kitchen walls, the encounter played out in a split second flash of joyous rage and violence. The boy’s name is Jake. He was raised in an all-female household with four elder sisters whose relationship with him could best be described as fractious. Ever teased and chided over his ginger hair and awkward demeanour, bitterness has long since taken a hold.

“Ginger nut fell in the cut and frightened all the fishes

A fish came up and ate him up,

And that was the end of ginger nut.”

It’s his sisters Lotte and Helena doing the baking, joint champions of the annual village competition five years in succession with a sequence of unanimous victories. Their winning recipes are closely guarded and their time at the kitchen worktop is mapped out with the utmost precision. It’s this picture of control that Jake is determined to upset. To aid him in this objective, an off-cut of building materials from the garden patio has been smuggled into this chamber of baking excellence. The slab sits in wait silently beneath the worktop on the mezzanine level above the kitchen. The girls have been working on this cake since early morning and Jake’s anger is righteous. His act will represent, in accordance with Debord’s theory, “the integration of present or past artistic productions into a superior construction of a milieu.”

Ben Robinson is an artist and writer based in Dundee, Scotland. He was features editor at the Yuck ‘n Yum art zine and is on Twitter @benjackrobinson. 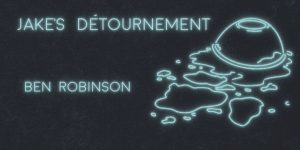 Read Next: SURVIVOR! by Julia Tausch