Sadonna was always my last visit that summer before she died.

At Derek Jeter Rehab Center-Delray, we dispensed meds between 1900 and 2100. I’d start with the early sleepers at the sober house on 999 Swinton, then swoosh on Freaky Fred’s moped through the back alleys and garbage docks behind the strip mall to the sober houses on 9th and 10th streets, between the head shops and the Amscot. I dispensed Suboxone, SSRIs, SNRIs, B-Vitamins, and retrovirals for the former needle users. On a PRN basis, I distributed: hemorrhoid cream, Midol, hydrocortisone, aloe vera for suntan relief, dimethicone for chapped lips, and Immodium A-D.

We didn’t all take this route. Abdaliz drove the facility Astrovan the other way on Swinton to her complex, Sea Oak, on the fake lake with the sad ducks. She’d put her babygirl to bed and then get high and grub McDonald’s with her cousins.

Freaky Fred hit the NA/AA circuits in Delray to recruit new clients. He had business cards with QR codes, fake sobriety chips, addiction stories stolen from Reddit or Discord. He gushed about finding sobriety at Derek Jeter-Delray. He’d normally return with one or two new clients a week. We secretly called them “Coins,” as in cryptocurrency, untraceable cash. We split $5,000 between us for each client, Abdaliz, me, and Freaky Fred; the rest went to our employer, a Big Pharma consortium that owned hundreds of sober houses across Florida and Arizona and got rich on unregulated urine tests, patient brokering, and what one Florida congressman called the “lethal cycle of intentional failure.”

Those were the good days. They’d chain-smoke under the carport where everyone watched COPS while we verified their insurance. Whenever we brought in someone new, we had to kick out someone old. That’s math. When he recruited Sadonna, it was my responsibility to get rid of Tara.

Sadonna sat lotus-positioned on a deflated air mattress stricken with claw marks when I finally came in at 2105, finished for the day. Always. It was her time to meditate, which involved listening to old Howard Stern in the background. She’d moved into the vacant room after Tara’s overdose.

“Best thing about the air mattress is you can balance your phone on the creases to watch stuff,” she explained, blinking her eyes and flinging her wrists around. She was trying to be positive.

We sat on the mattress together as I got out her EZ-pack and whatever fast food I’d picked up on the way. She identified her meds and signed her initials, a forensic S K, and then we made out for a while until our hips and elbows speared the floor through the flat mattress. We always just fooled around like middle school, even though we were both almost 40.

I balanced a plastic table over the deflated mattress as she separated the burritos, rice, and Mountain Dew from plastic containers into two bowls, two plates, and two glasses, which she called her “good China.” We gripped plastic utensils stolen from Taco Hell. I closed the windows against the sound of people kicking vending machines and ravaged calls for Naltrexone! Naltrexone!

“What did you learn about yourself today?” I asked. I was joking, she knew, but it was also a part of the script, which I later figured out she knew as well. The routine was an important part of our relationship.

“I learned what you did to the girl here before me.”

Sadonna and I still talk even in here, the private prison operated by the GEO group. They busted me as the first violator of Florida Bill 807, which criminalizes patient brokering, in addition to more obvious charges like manslaughter, pharmaceutical fraud, and online solicitation. Body Brokers, Zombie Hunters, Junkie Flunkies, Naltrex-Heads: whatever you call us, the other inmates despise us. Therefore, I stay inside my cell 24/7 reading memoirs Sadonna scans into my brain—Herr’s Dispatches, Agee’s Let Us Now Praise Famous Men, Karr’s The Art of Memoir—to prepare me to write my confessions about The Florida Shuffle, so her death will have meaning, she says.

She hovers in the corner of my cell, still wearing the It’s Always Sunny in Philly hoodie she overdosed in. Just like old times, she asks: “What did you learn today, honey?”

“Mary Karr says good memoirs are vivid and detail-driven.” I notice I project my voice toward her hovering form.

“I miss details, everything’s so blurry when you’re dead,” she rues, looking down at me not with love but something like a new emotion.

We just look at each other until I ask what’s the matter.

“You still haven’t confessed,” she reminds me.

James McAdams’s debut short story collection, Ambushing the Void, was published in May by Frayed Edge Press. He teaches literature at the University of South Florida, Ringling College of Art+Design, and Keep St. Pete Lit. He is Flash Fiction editor of Barren Magazine. Currently, he’s > 100 pages into a novel-in-flash entitled The Florida Shuffle; Or My Summer in Rat Park II. You can find him at http://jamesmcadams.org and follow him @jamestmcadams on Twitter/Instagram. 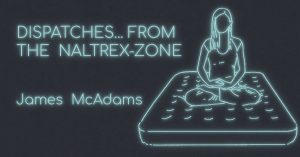 x-r-a-y magazine
BOLD NEW ‘DO by James R. Gapinski
FACT: HANNAH AND HER HUSBAND USED TO BE HAPPY by Jennifer Todhunter