FACT: HANNAH AND HER HUSBAND USED TO BE HAPPY by Jennifer Todhunter

Hannah passes out with the lights on again, the room as bright as day. Her phone is almost dead from staying up late sexting, slipped underneath the pillow on a bed that’s not hers—a bed she borrowed so she can sort her life, a bed too short for long legs, bent like figure fours on unfamiliar sheets. Hannah preset an alarm (and a backup and a backup for the backup), but she wakes when the alcohol abandons her system instead, her stomach pinched with unease, her brain brimming with a laundry list of what-ifs, always landing on the worst-case:

What if we divorce?

What if we stay together?

On Hannah’s way to work, the train and bus are filled with people wearing face masks, the hysteria surrounding the epidemic-almost-pandemic a fever pitch. The thought of putting something over her nose and/or mouth, the thought of breathing in her own breath despite having brushed her teeth three times since rising, recycling the fumes from last night, the wine and clams and fries and garlic, makes her want to barf.

Hannah and her husband married on the edge of a river, fifty feet from the spot they’d chosen, and neither one of them noticed they were in the wrong place.

Hannah and her husband honeymooned on Tenerife, the largest of Spain’s Canary Islands, and spent the whole time shitfaced.

Hannah and her husband both know the Spanish flu is the worst pandemic to-date, killing over 100 million people, yet they’re planning a return trip despite this other flu taking hold—a trip with their kids, so their kids can swim in turquoise water and gorge on calamares a la romana and patatas bravas, while Hannah and her husband revisit the place they first fucked when married to see if it jolts something inside.

Fact: The odds of being struck by lightning twice are 1 in 9 million.

Hannah knows in the base of her being, the crunch of her heart—she’s not going to be struck back into anything.

Fact: Hannah’s husband hasn’t struck her, but he’s struck the wall next to her head and that was close enough.

Hannah stands outside her office building in an inappropriate jacket and casual shoes because living between two places is a bitch and one rarely has what one wants. She watches rain run off the bridge overhead, opens her mouth and feels it fall against the scum on her teeth. She wishes the rain were mucus slipping inside her, pandemic-flavored mucus, the slip more of a twist and a thrust like she told the guy she was sexting last night, and maybe she’ll get infected after all and Spain will be off the table.

Every Tuesday, Hannah and her husband carpool home from work so they can both watch their son play hockey, and they always pre-agree not to talk about anything meaningful or difficult in terms of their relationship on this weekly ride. (Fact: Months pass quickly when counted by weeks.) Hannah always buys each of them a coffee—espresso, milk, honey—before they start on the long drive to different homes in the same community, veering in and out of gridlocked traffic.

Fact: Hannah would prefer to be on the bus or train, but there’s the damned epidemic-almost-pandemic, and she can’t bear to bring sickness home to the kids she sees only three-and-a-half-days-a-week, so here she is, in a car with her sort-of-husband. Again.

Fact: Kids under five are more susceptible to the flu.

Fact: Only 30% of women have more than two children.

Fact: Hannah had two back-to-back babies and was done forever.

Before Hannah’s husband stopped drinking, he liked to explode her friendships. To this day, Hannah isn’t sure whether this was something he did on purpose, a control mechanism, or the booze telling him to act like an asshole.

This is what keeps Hannah up at night when the booze isn’t.

Fact: Hannah is aware of the irony.

After this week’s hockey game, Hannah and her husband will sit at the dining room table, listening to their kids talk excitedly about Spain, about its sunshine and seafood, about the novelty of going together. Hannah will sip a glass of wine, consider what it means to move on, how moving on is just taking up space in a different moment, moment after moment, and how all these moments equate to a lifetime.

Fact: Hannah and her husband have one life each of indeterminate length.

Fact: A life has a start and an end.

Fact: Marriages, however joyful, have a start and an end, too.

Jennifer Todhunter’s stories have appeared in SmokeLong Quarterly, Necessary Fiction, CHEAP POP, and elsewhere. Her work has been selected for Best Small Fictions, Best Microfictions, and Wigleaf’s Top 50 Very Short Fictions. She is the Editor-in-Chief of Pidgeonholes. Find her at www.foxbane.ca or @JenTod_. 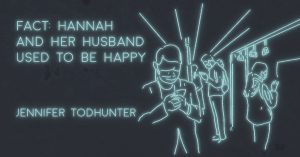 Read Next: BUMMING by Chelsea Harris