The petrol station has a toilet but no window. Behind the door, a song that she has heard before  plays. Or maybe she hasn’t. It’s muffled. The speakers’ range only extends to the shop with its packet sandwiches and cheap mobile phone accessories.

She exits and catches a glimpse of him in the convex mirror above the window. His body morphs into a giant insect. A bloated beetle in jeans.

“Are you listening?” He taps a finger on the counter. “I said pass me one of those cans…no not that one, that one.” He snatches the drink and fumbles a note from his pocket. “You’re useless, you know that? Go and wait outside.”

She looks down at her shoes, swilling them gently in a shallow puddle of water and petrol. A tiny rainbow soaking her laces black. When she looks up, a deer is standing motionless next to the car, its nose twitching, sniffing at the air. Its head swings toward the sound of the glass door.

The deer springs toward the road. Brakes scream as it misses the bumper of a hatchback. It bounds into the field beyond, disappearing into the grass, turning a muddy brown in the afternoon light.

“Fucking things are everywhere. I hate this place. Why didn’t you scare it off?”

She measures time by the motorway floodlights. Counting them in her head as he listens to whatever he wants on the radio. Carole King sings, as day and night melts into a gray pattern of sleep.

In her dream, Mummy tells her that Daddy was moving furniture. That’s how the cardboard wall of her dollhouse got ripped. That’s how Mummy’s face got the scratch. But it’s okay because Daddy fixed the wall with tape, and Mummy used ice. And for a while there is silence. Silence until the tape on the wall turns yellow and the furniture scrapes across the floor.

She wakes with a start. Now her father sits next to her. Her father, in a cheap leather jacket and receding hair, taking her to places she does not want to go. His hands choke the steering wheel. The skin is dry and red. A flake breaks away from a tight knuckle. It floats gently, like a tiny snowflake, toward the recess of the gear stick, where it settles on a landscape of cracked black leather.

He speaks through a mouthful of drink. “See, that’s the problem with you right there, you don’t listen. You—”

She switches off and looks at the oncoming cars, their headlamps sinking into the gloom. A light rain starts to fall. He flicks the windscreen wipers on, and they smear a film of grease across the glass.

“And that’s just the start of it, you wait until—”

The can, half crushed by his grip, vibrates its way toward the edge of the dashboard. It falls into his lap.

The car starts to veer as he brushes at his crotch. Ahead, two glassy eyes walk out into the road. She checks her seat belt and doesn’t bother to warn him.

Jack Wildern is from the UK. He writes short fiction and lives in Hampshire with his wife and two children. His work is published in The Book Smugglers Den, Parhelion, Rue Scribe, Dream Noir and Haunted MTL. His most recent short story Hell was chosen for publication by Night Picnic Press and is presented in both English and Russian. 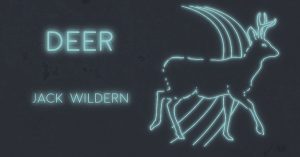 Simon Graham
FACT: HANNAH AND HER HUSBAND USED TO BE HAPPY by Jennifer Todhunter
MEMORY PALACE AS MAZE by Kate Tooley