“Words fail…” No one says that anymore, but sometimes she still thinks it. She hears it in her mother’s squeaky, horsehair voice, the one that meant sarcasm: when her father put all the pots and pans in the oven to “clean them,” when the neighbor dressed her Persian cat in a tutu…But that’s not the only time words fail—quick footsteps behind her at two a.m., Ginny waving from airport pick-up after two months in Tucson, her dog’s muscles going slack before the vet has finished emptying the syringe—these are also things that cause a blank space, a lapse in words. And sometimes the words are simply too big. They’re too much the wrong shape, and she can see that trying to get them into someone’s ears will be a square-peg-round-hole kind of situation. She learned about that when she was nine years old.

Her memory also lapses, almost constantly. She pulls a photograph of her ten-year-old self from a disintegrating paper Eckerd’s photo bag. (Until that moment she thought it was “Eckerds” with a built in “s.” There are as many kinks in her memory as there are in her DNA.) She tries to make eye contact with the girl in the photo, thinks: “I don’t remember this day, don’t remember that shirt, or why I look like I’m being eaten alive by army ants.” She knows she should remember pain like that, but at first, she doesn’t.

Every place she lived is a part of her memory palace, each room a discrete snapshot, a roll of film exposed by dented drywall or juice-spill-stiff carpeting. In between rooms, though, her memory lapses: In the living room she remembers building forts out of sofa cushions or bringing someone home at two-fifteen a.m. and doing things you should never do on a couch you share with roommates. These do not happen in the same house, but both happen in living rooms. But between that room and the kitchen, she sometimes loses years, months. The time the chocolate cake exploded in the oven happened  ten years after she last built a castle out of pillows. And in the other kitchen, they drank the cheap rum punch on her twenty-third birthday, a long time after she stained the couch.

She’s said careful goodbyes to all the rooms she’s ever lived in. She is haunted enough by people. Sometimes the goodbye was a hard look and a slamming door: Bette Davis in her head. “What a dump.” Sometimes it was fixing the protruding head of a nail in her memory, because she knew that if she remembered that nail, she would remember the moment before she learned what it was to feel irreparably helpless. Sometimes these were the same goodbyes.

Time does not respect pain. It tears months out of your memory and then subjects you to minute-by-minute replays. It does not wait for you to feel safe and happy to bring back days you’ve tried to banish.

Time and mothers. Her mother has sent this box of things: stuffed animals, mugs, photos, T-shirts. They are “downsizing.” She calls her parents dutifully but does not go home to visit. Her mother has resorted to the mail to bring up the past.

The package arrived on Tuesday, so today at six forty-five, four days after seeing the photo, after finding out there is no “s” in Eckerd, she drinks a sour beer and gets ready for a Halloween party. She shoves a pin in her hair and remembers, in color, about the army ants, the invisible ones that were biting her in the photo. She wishes she’d let the photo stick to the paper and fade in a back drawer, where someday some cousin’s child, after a funeral, would dump everything into a garbage bag because they have kids to pick up from school and only so much time to clear out drawers crammed with memories.

Just as she got the too-small pair of purple stockings above her knees, she remembered—in spite of herself—in spite of closing the door to that room firmly. It was the day they’d moved into the apartment, and the downstairs neighbor introduced himself, warned her parents about keeping the windows closed in the summer because of the smell from the dumpster. It was the first time she felt like a cat with its fur on end, immediately and irrationally afraid. She knew it was “irrational” because her mother said what a nice man he was, and her father invited the man over for dinner. Afterward, her mother made her pose in front of the building. She stood off balance in the itchy, pine straw-covered flower plantings and tried to make a place inside herself for a feeling no one wanted  her to have.

He earned a standing invitation, so every Wednesday, she pretended to have a stomach ache. It was better not to eat than to sit by him through meatloaf or chicken n dumplings. Once her mom figured out the game, she got either switched or grounded; she preferred the switch. She never went into the downstairs neighbor’s apartment, no matter how many times he invited her to come play with his Pomeranian, Vlad, who carried a stuffed squeaker lamb everywhere. The kind of dream-fear that roots your feet to railroad tracks kept her on the other side of his sun-heated tin doorsill. She couldn’t remember when she learned that doors had sills. Had she known then what it was called, that thin strip of metal that marked the boundary between marginally safe and unsafe? She’d forgotten until now. Isn’t it funny that it sounds like dorsal? Like the back fin on a dolphin, which was her best friend Robyn’s favorite animal.

It was Robyn she was supposed to meet that day. Robyn walked Vlad as a summer job and insisted they meet in front of the downstairs neighbor’s apartment. They planned to stake out the pool and wait for the ice cream truck; Robyn owed her a rocket pop. It was Robyn’s voice, a voice she knew like music, that went off-pitch with fear, and made her hand shoot to the door that should have been locked. It was Robyn who she saw at his feet. She didn’t do anything. She didn’t say anything. There weren’t words in her mouth.

She knew, without the downstairs neighbor saying, that no one would believe her. He grilled out with her dad, and her mom always said what nice manners he had. She did not have to be told: Iwillkillyou, Iwillkillyourparents, Iwillkillrobyn. She knew these things were true, and so she begged for a bunk bed that felt like a castle and told her parents that she and Robyn had a fight about school. Eventually her mom gave up on switching her, and she would hide in her bunk bed and listen to his voice rattling on and on about WWII history, big government, and “kids these days” from behind the closed door.

When she was sixteen, she slammed that front door for the last time and got caught inside the past for a full minute. The nail still sticks up from the handrail at a right angle, and she can still feel the thick laces of her light-up, princess sneakers. The nail is the last thing she remembers before she went to meet Robyn downstairs, will be the last thing she remembers about leaving home. She wonders if finding the picture is the end of the story, remembering she knew before she knew and making that somehow the moral of the story. She wonders if she could find Robyn on Facebook, if she wanted to, and what would be the point anyway. She wonders if she should tell her parents, crack open their memories like eggs and beat them to a froth.

She leaves the photo on top of her bedside table. Later, at the party, dressed as a fortune teller, she starts conversations by asking people if they know it’s called a “doorsill.”

Kate Tooley is a writer living in Brooklyn with her wife, cat, and a collection of dying houseplants. Originally from the Atlanta area, she is currently pursuing an MFA in Fiction at The New School. Her writing can be found online at Longleaf Review, The Inquisitive Eater, Apocrypha and Abstractions, and newschoolwriting.org. 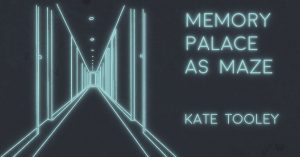