She says it big and like a threat and smiling, horseshoe in hand, “I don’t like losing,” and she swings, lets go, and hits the stake head on. A ringer—iron rings against iron and I hold my drink up and shout for her. The game is alive again. Kayla plays inconsistent. It’s sometimes hard to watch, some bad throws, can’t even get one close, then she gets pissed off and you can see in her face that she’s decided it’s over for her and she’s just going through the motions. It’s awful playing her when she gets all fixed like that. But other times, she’s full of fight, and makes these huge comebacks, and turns nights into something full of suspense. Tonight, she’s playing against Friend and is wearing his Sublime t-shirt, which hangs past her shorts so it looks like she’s wearing nothing else. She’s behind a little but she’s got that sharp look in her eye and it suits her. Her nose and cheeks are pink from the sun and her freckles are at their deepest across her knees. Her hair is wispy from sweat, and her curls flicker red when she moves. Friend and her are together again, the same way me and Lee are together again. Our rhythm of returning, constantly returning, like a tennis ball against a wall and back again.

Next, Friend gets his first one pretty close and as he sets up for his second, right before the horseshoe leaves his hand, Kayla lifts up her shirt and flashes him. Her tits stun. One of her nipples is pierced. I was there and held her hand when it happened. It bled, stained the shirt she wore that day. I look at Lee and see where his eyes are at and of course they are on her and he catches me in the corner of his eye watching him stare so he looks up at the sky and studies it as though he is innocently and curiously bird watching. I think about how he looks at me topless—plainly, like familiar architecture. Friend misses bad and curses, spits into the dirt, but not seriously. “You play dirty,” he says, and she shrugs, her eyes ablaze. She grabs the horseshoes from the grass and moves herself into position. Her face turns serious, dark even. Her light brows scrunch up, and she sucks air in and brings her lips together like she’s about to jump deep underwater. The shoe turns in the air and hits the stake straight—dead on. Nobody talks because she would have our ass about it. She picks up her second shoe, no ounce of celebration in her body. I am breathless despite it being common, days like this. Something about seeing her get close to winning gets me tense and emotional. And I always feel proud to know that I knew it was in her this whole time. Kayla brings the horseshoe up to her chest, large against her small frame, pulls her arm back, and lets go. It turns in the air; and though this one looks like it was thrown with a little too much arm, looks like it’s about to fly right over the stake, the shoe turns again just so and it hits, and spins all the way down. Kayla throws her fists up and punches the air and we all cheer. She comes over to me, and I get up off the cooler, and she pulls herself out a tall Twisted Tea, cracks it and gulps. “I like that feeling of coming back. I wish you could feel some of that every day,” she says and Friend comes up behind her and spanks her.

Kayla has always lived in the trailer beside mine. Our windows look into each other’s. Sometimes when I turn my head to the side when Lee is fucking me, I can see Friend fucking Kayla. Sometimes on accident we make eye contact and it makes us laugh.

A winter came once when the snow fell hard at an angle for days and days and we were too young to be wary of our roofs being warped under too much weight. Kayla was sick from withdrawals. A peace came after weeks of it, and we were tear stung, and she said, “We need each other,” and I knew that was true, and always had been. Before we met each other even, something further back. I said back to her, “Thank God.”

Kayla and I are outside sprawled out on the couch facing the woods. We watch Friend and Lee walk off, thick clouds trailing behind them from their vapes, so much it makes a new weather. They are taking their guns to go shoot at cans. Kayla is rolling her face with a glittering rock. “It’s a rose quartz roller. It makes your under-eye circles go away and rose quartz corresponds to your heart chakra…” she trails off, leaving me to assume I knew what that meant. She shoplifted it yesterday and didn’t have to. She is searching for new ways to feel good again. She brings my head into her lap and rolls my face all over. Muscles in my jaw—I had never noticed before—were tight as a drum, and the rock over my cheek felt like the first careful steps onto a recently frozen over lake. Kayla is on again about the duplexes they are putting in across town. How nice they seem, how big and new. How they are set back from the road so you wouldn’t hear cars pass. Her hope is to move in one with me right there on the other side of the wall. I like when Kayla talks like this, accelerated and dreaming. And I like the idea of life, right beside her. But on my side of the wall?—I am not sure Lee loves me or has ever loved me or will someday love me. I can’t count on it. I’m surprised I don’t care. I imagine a large, blue rug, thick and plush, that I can lay on like a cat. I imagine Kayla coming over for dinner. There are things I can see perfectly.

The soft wind tangles our hair together. Here—the smell of the air is two different things, coming at each other from different sides when the breeze lifts lightly across the yard. From one side, it is ocean, from the other, it is the smell of cow shit coming from Thibodeau’s. The way it can hit you can feel strange—no cows in sight, no waves, no immediate sounds to match the smell of things—and it can make this place feel like a mirage, a place that can ripple and disappear like one of those holographic school folders that change animals depending on how you hold it.

Once, Kayla and I decided we wanted to die together and we set a date. We walked to the edge of a cliff and we leaned over. We decided against it. We decided on going somewhere else.

Mary Alice Stewart‘s work has appeared in Washington Square Review, Hobart, and The Nervous Breakdown. An essay of hers has been translated into Italian for Edizioni Black Coffee’s website. She is at work on a short story collection. She is from Maine. 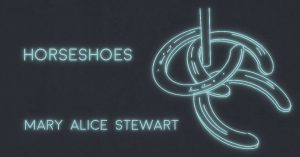