I WAS SO READY TO BE ENDURED: A REVIEW OF LAURA THEOBALD’S SALAD DAYS by Evan Williams

Laura Theobald opens her new collection Salad Days with an epigraph from Antony and Cleopatra. Fitting. This book is an acerbic wedding, rejoicing in the union of our worst impulses and their natural consequences. Everyone is dressed to celebrate, except we’re alone. So, so alone. 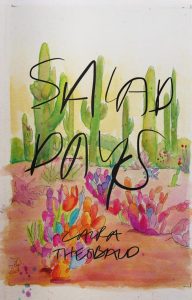 To be forthright, I had no idea what to make of Salad Days initially. I read the epigraph and thought, “Ah, destructive love, imperial curiosity.” I read the index, where I found the book split into seven spectacularly-titled sections: Waves of Confusion, Art for the Afterlife, Moon Unit, Future Moods, Double Fantasy, Sour Times, and Infinite Sadness. I read the book a section a day.

In the first line of the first poem I encountered a “you” and felt safe in the embrace of what I first guessed to be love poems. Then there’s this line, from Fish Poem, that goes like “I was so ready to be endured.” It’s here that I became pretty sure these were not love poems, but anti-love poems, which are as loving as love poems because they are not breakup poems. And, because they are not breakup poems, they imply a hanging on; this realization made me afraid.

I was afraid because I was settled into and inseparable from a book, to quote from Art Poem, so totally “invested in a life of destruction.” I bailed on my plan to read the book section by section, started over at the beginning, then read the whole thing in a sitting. It’s a whirlwind, I suggest you do the same if you’re able.

The narrator’s desire to impose themselves, to be endured, is never really directed at an agent to do the enduring beyond an implicit “you,” and so the narrator has allowed themselves a space to be endured by everything, starting with the “you” of these poems. What’s clear though, is that imposition is synonymous in the text with expenditure; imposing the self is to offer oneself up for annihilation, and it’s sort of thrilling. It comes through in the structure of every line, none of which close with end punctuation, and so always leave off waiting for another line to carry them. Most, if not all, of the poems read like couplets where any line can be the first half and any line can be the second. Even those poems with an odd number of lines give this impression, articulating subtly the possibility of devastation by asking formally: what if the second line to my couplet never shows up to build on my suggestion?

As the book builds on itself, the scale of the destruction in which it’s invested grows exponentially. We’re taken from the kitchen with its tomatoes and potatoes and fish, its ass and diamonds and islands and onions, to the sun and the empire, the clouds and the earth. In the transition there’s the rapidity of the narrator’s dissolution, and there is the exponentially growing scale of destruction won from each successive annihilation. Every time we are made to feel small, we make ourselves that much bigger so our destruction might be noticed.

The crescendoing scope given over to the agent of our annihilation begins in Flowering Poem, where Theobald writes, “When you wake up you will think of me/But when you die you will think of something else.” It’s a brilliant couplet. The offer of the self (to be endured, that is being endured) to close the first line, then the turn toward a vague something else to close the second enacts precisely the sort of treachery of which every line in this book is wary. Then along comes Empire Poem to say: “You were my favorite empire/You had a voice like when the sun is setting.” Here’s the imperial curiosity. To be thought of when another wakes, to be dismissed when they go to sleep—it calls to mind the idea that the sun never set on the British Empire; if we seek to feel part of the empire’s light, we know already it will run away from us to shine somewhere else. Yet, the narrator speaks to the overarching sentiment of the book, saying, “I would like more time to look at the sun/The sun is totally without pretense/Shining its cancer onto everyone.” There’s almost an appreciation. Recalling the thesis of Potato Poem, “It happens fast/Like anything that is terrible,” it’s difficult not to believe that because we are here dying so slowly, being weaned drip by drip by drip of the selves we impose, maybe it’s not terrible, maybe it’s even lovely.

The collection concedes, those of us invested in this form of self-destruction concede, finally, with flair. “Yes yes yes everything is beautiful/with an expiration date.” Though, whether we’re meant to take our repose in the idea that living for destruction must come to an end, or that being endured without being destroyed can only go on for so long, I don’t know. And again, I am afraid.

Evan Williams studies at the University of Chicago where he writes about surrealism, the anthropocene, and masculinity. His work has appeared or is forthcoming in DIAGRAM, Pleiades, and Passages North, among others.

Read Next: ZAC SMITH on Normal Life with REBECCA GRANSDEN

Crow Jonah Norlander
THE STOAT by Nick Perilli
IF YOU CAN, LISTEN by Jake McAuliffe