We set the fire up in your backyard with only three logs, two on the bottom and one perpendicular across the top. I was quiet around you then, cautious. I’m afraid I still am, forever worried about possible endings. The fire burned for hours once it got started, but initially it was stop-and-go. We fed pages from the phonebook into the empty spaces, watched the flames cause each to curl inward, the ink running down in a purple wave until it burned itself out and was replaced. When the logs caught, it was just their edges, little strands of wood glowing, and I blew on them, softly, tried to protect them from the breeze. The sun wasn’t down yet but the air was cooling. When we were sure the fire would stay lit, that it wouldn’t go out when we turned our backs, we settled into lawn chairs next to each other. I wanted to kiss you but instead I opened the beer I’d taken from your refrigerator. I sipped at it, bitter and metallic and cool.

For a while the logs hummed and clicked in the evening air and the sun sank lower and there was hardly any smoke, only flames licking at the impending dusk. I said that the wood must be dry, cured in this Colorado air, but I was wrong, and soon they started hissing. The smoke came at us in waves and you leaned away but I didn’t, saw no getting around it and so leaned in, taking it into my lungs and my pores until my eyes were dry, until I could smell nothing but the wood burning in my childhood fireplace where I used to sit with my brother and read or watch television, and I thought about how I always wanted to be closer to the fire than he was, afraid he might get burned.

When the sun was gone but there was still enough light to see each other, you asked about him, or maybe I brought him up. I told you what he told me once, that he could only see one end to his life, that if not for me he’d already be gone. I think that’s true. I didn’t look at you while I spoke, instead staring into the fire and letting the smoke be a curtain around me, and for days afterward, in the steaming shower, I would smell it rising up off my hair.

In the darkness we left our chairs and settled again on the bricks around the fire, side by side, close enough to touch the burning logs. We stared with envy at the center, at its moving and changing glow that we could never touch for all that heat. I wanted to heal the fire, preserve it, because every change is a type of loss, but we stayed at the periphery, looked in from the outside. You pointed to a field of glowing crystals, and said that orange is a color only beautiful in its element, always transient and natural and I knew that you were right, that it was the destructive power of combustion that gave off such warmth, projected such beauty, that even the sunset is a type of elegy, and I recognized the ugliness and the desperation in asking for permanence.

I stared at the glowing crystals until finally whatever held this structure together succumbed to the pressures buried inside and the whole thing shifted. I didn’t know yet what was coming, the breakup and the reunion, standing with you in an oasis in the middle of a desert, crying on my bed, watching the sun set over the rocks on a beach in California, waking up next to you and wanting, for the first time, to be exactly where I was.

Together we remembered the beginning, when sparks ate words off the page, but it was long gone, so we settled for watching tiny fires that bubbled up through the ash, light in places we thought had already burned to nothing. We listened to the crackling and popping and huddled together until we were touching, knees, shoulders, almost hands, and despite our gaze the fire finally became only embers, and it was after that that I kissed you, for the first time, there in your kitchen, and I mourned the loss of everything that exists, the very nature of heat itself, even before it left my lips.

Evan Senie is an MFA candidate at Colorado State University. His work has been published or is forthcoming from Hobart, Blue Earth Review, and Atticus Review. Find him online at evansenie.com or on Twitter @_senieevan. 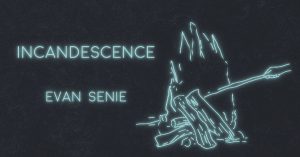 Read Next: NO EASING INTO IT by Lori Yeghiayan Friedman