the small Missouri town that the family was from. A small town he had never been to. Never even been to Missouri. Probably never will be. Can’t even remember the name of the town. Still, he liked Uncle Ringo, the youngest of the three kids, the only boy. The only uncle he had. His father only having an older sister. The missing finger fascinated him. The absence of a finger and the remaining scar was the strangest thing ever, like it had been hastily erased by god. When he first saw his Uncle’s hand

that eventually he grew to think of as normal for Uncle Ringo, like it was normal for Grandma Vi to take all the pills she took. And then it was super cool to have an Uncle who had such a gruesome, unique hand. A whole missing finger; brutally ripped off. He told his classmates about it and the girls thought it gross, but the boys didn’t think it was awesome like he thought because they didn’t believe it at all and he got angry because he couldn’t prove it, so he

missing finger with the gnarly nub of a knuckle at the end, or would it be the beginning, which wiggled just a little bit, creepy and cool all at once and it really gave Uncle Ringo an envious distinction, so he was relieved that at some point, if he remembers correctly, Uncle Ringo

which he now knows is often what happens to extended families, even immediate families. The ties loosen throughout the years and things that were once important become just nostalgic details like Uncle Ringo’s missing finger that intrigued him so much and to this day is clear as day in his memory.

Brian Brunson is a writer living in Phoenix, Arizona. He studied history and philosophy at the University of Oregon. His short stories have been published in The Doctor T. J. Eckleburg Review, Otis Nebula, Belletrist, Fleas on the Dog, and X-R-A-Y Literary Magazine among others. 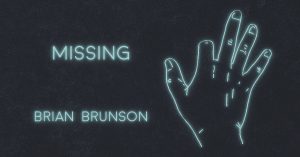 Read Next: THE EXPLODING TREE by Kevin Richard White