We were wild girls. Raised with dirty feet, tangled hair. Our dogs followed us down the roads we walked, but our mommas rarely did. We played hard, fought hard, loved hard. Fate cheated us from being sisters, so we bound ourselves together with blood ritual. We couldn’t go downstairs to the kitchen to get a knife, afraid of waking momma. Instead, we broke a jar in the upstairs bathroom and sliced our thumbs open; our skin peeled back, vessels bursting and spilling over. We pressed our cuts together and imagined our blood forever combined. “Soul sisters,” we said, sucking the ruby blossoms clean.

Our world was complicated. Drunk, aggressive father figures. Stressed, underappreciated mothers. Unchecked tempers, overactive imaginations. Our world was filled to the brim, but it was never full without each other.

Our favorite spot was the pasture. We hung out by the ditch which split the open field from where the silos were. We were terrified of those silos. “People die in them,” our big sisters told us. On the opposite end of the field, a wooded area backed up to Gigi’s house. We rarely went there either. “When trees are that close together, something’s hiding in them,” our sisters said.

We named the cows we recognized: Dippin’ Dot the spotted, Esmeralda the jeweled, and Hercules, the Brahma bull. We made up stories about them. Hercules was the dad or the husband, depending on the day. “Hercules! Buy Esmeralda new jewelry. Her nose ring is gettin’ crusty.”

“Stand on top of the hay bale and wait till they get close, then we’ll jump on their backs.”

But the animals were usually impartial to us. Except the day they charged us.

The cows and bull were up by the ditch, and we were walking across, closer to the wooded area. The next minute blurs. Hercules charged, and the cows followed. We ran for our lives hoping to reach the fence in time. Our bare feral feet crushed the leaves beneath us and tore on the fence as we clamored over it, chased by a stampede.

We were so much alike. We looked alike, laughed alike. Our wavy brown hair and round blue eyes fooled strangers into believing we were sisters. We had rotten tempers and little impulse control.

Our savagery at home never matched how we were told to behave in school. We went to equally strict Catholic schools for elementary and middle. We neither liked nor understood their many rules. We may have been somewhat neglected at home, but in that, we found a freedom that set us apart.

We went to the same high school in ninth grade, the Durham School: an expensive, non-denominational religious school, a disaster, for both of us. We didn’t have a prayer of fitting in with our divorced mothers and our middle-class-income households. We lacked the social manners those kids had. While those kids knew how to behave, we were still in the pasture.

We befriended Katy, who lived in the Country Club of Louisiana and was a Durham kid through and through. “Y’all don’t have promise rings?” she asked before long. “We all have them.”

“Your father gives it to you for protection. It’s a promise between you and God. You know, not to do stuff with boys.”

We didn’t trust promises. Not all fathers were protectors.

Her mother disliked us almost instantly. Our families were not like hers. They respected my attorney dad, but their noses wrinkled at my two-time divorcee mom with her four children and beat up Suburban, which she proudly called “The Beast.” Did it matter that she was a lawyer, too? Your dad played and coached rugby, laughed at blood pooling in grown men’s mouths. Katy’s father cleaned our cuts and complained when we came home dirty and bleeding from a neighborhood romp.

You were jealous of each other. Who was the best friend? I’m sorry I chose Katy’s side. She was new, and maybe we were sick of each other? Of liking the same boys? You must have been sick of reassuring me I was beautiful too, that they wanted me, too. I was jealous of both of you, but the green monster on my back shrank around Katy, lighter sans the years that fed, piled on flesh, around you.

We defaced each other’s lockers with hurtful words and gave our best withering glares. Our cold war heated up at lunch one day. We met by chance, outside between the lockers and the cafeteria. You turned to me, asked, “Why did you write “slut” on my locker?”

“Because it’s true.” I’m still sorry for that.

The next thing I knew, I was catching your fist from hitting my face. Frustrated, you turned and punched Katy instead. Hysteria broke loose after a girl in our grade yelled into the cafeteria, “Fight! There’s a fight outside!”

Katy cried and cried and cried in the principal’s office; I could hear her pleas from the next room. I shut down, turned vacant as the disciplinarian ranted, already desensitized to angry men and too young to untangle fault and blame. I pictured my mother’s weary face. My father having to pick up the phone once again. Another call from an authority, another possible expulsion. I don’t know what you did in there, but you were quiet. I imagine, maybe romantically so, you behaved similarly to me.

Katy’s mom smoothed things over with the principal. She was the victim, and we were the perpetrators. No matter that most of the writing on your locker was in Katy’s handwriting, no matter that Katy and I had done most of the instigating. She wasn’t punished, but we ended up with in-school suspensions, and by that time, we were sneaking out of our respective cells to chat and joke with each other. All was well again, almost like our fights when we were kids.

Our parents referred to us going to the same school as what it was: a failed experiment. I made terrible grades and was often in detention; you struggled with the commute from your house. You transferred to another private school in your neighborhood, and I ended up at a public school close to mine. We made new friends and lived in different worlds. After our freshman year, we slowly went separate ways through the rest of high school. We’d talk here and there but never like we used to. There was no defining moment or dramatic exit, our friendship just faded.

By our first semester of college, we hadn’t spoken in well over a year. That first day, I walked into a spacious auditorium with hundreds of seats and hundreds of people for Art History 101. Feeling overwhelmed, I picked a random row in the middle of the room. At the center, your fishbowl eyes and long, curly brown hair looked up at me. You made that face you always have, where your eyes bulge and your mouth opens, where excitement and energy surge across those high cheekbones. “No way,” you said.

We hugged each other tight. It would not have been strange to see each other on campus, as we would many times throughout the coming years, but we had chosen the same class section, the same row, and ultimately, the same seats. We took this as a sign and skipped our classes to hang out. We never were productive together. Our relationship existed only in a state of play. We had no idea how to be serious, to work, or to function in the outside world around each other. “We should do this more often,” we said, back at your friend’s apartment, high, and laughing together again, as if years had not passed between us. But after that day, beyond stunted waves on campus, we didn’t see each other for a long time.

Did something pass between us that afternoon? Some subconscious thing that knew our lives were changing? The older I got, the more I resented memories of our childhood, of the extent of my stepfather’s violence. Happy memories of choosing to play in the pasture with you transformed into desperate longings to get out of the house. To separate myself from my mother sobbing over dirty dishes, from my baby brother’s broken foot, smashed between the folds of a kicked recliner. Did he ever hurt you, too, Mack?

From what mom says, we were still alike in our early twenties—we were unmoored. Is that true? Did you do too many drugs? Did you surround yourself with men who only loved parts of you? I only saw you once during those years when you happened to be dating my friend’s cousin. Did you worry about me, then? Maybe I should have worried more about you. Did he ever hurt you?

Years have passed since we have seen each other face to face. Your dad died this summer. Before him, your maw maw and your stepbrother, too. But more recently, your father, Mason. You found him on the floor in his apartment. Sounds of ten-year-old you, crying for him that night at the beach—when you got so homesick, he drove to Alabama to pick you up three days early—echoed in my ears, as if I’d strapped two conch shells to the hollows of my head, desperate to hear the sea.

But he didn’t always come get you, did he? Doesn’t matter now. Your memories of him will tinge with sadness and pride. His anger: righteous indignation. His inconsistency: genius. You’ll measure time by his passing, the prized befores, the distorted durings, the long afters. There will be so many afters.

Let’s transform these truths into one of the scary stories we used to tell each other at night in our tent at the beach. None of this was real. Your dad was alive behind that apartment door you knocked on before breaking in. He is alive, headphones on, music blaring, smoking a joint. Oblivious to the world around him and blissful.

Maybe this kind of thing should or could bring us together, but I appreciate and fear the gulf between us. The thought of you is too heavy. Discomfort comes with an oldest friend. You know all the smells of our childhood—grass, blood, whiskey.

I accepted your friend request on Facebook last month and combed through careful, new photographs of a luminous you, showing all your teeth in Cheshire grins mixed with equally careful pictures of your family, the living and the dead, mingling still in your photo albums. I heard your elastic voice in messages you sent me filled with smiley faces and exclamation points. I know I said I’d call, but I won’t. Guilt is only enough to spur my hand, to write, to reminisce. My world is too full, and I fear your added weight would send its contents spilling over the edges like blood rushing out of old wounds.

Blake L. Bell is finishing up her MFA at Mississippi University for Women and teaches at a magnet high school in South Louisiana. These days, she can usually be found at home, teaching and writing. To read more from her, visit blakelbell.com or follow her @blakelbell. 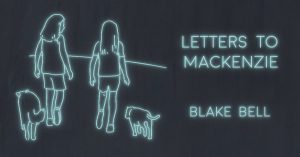