His name was Leonard. He was riding a bike. His arms held out to the sides of him, his mind never trapped by his own self, never buckling under the weight of what he should be, or shouldn’t be, understanding the truth of himself, always, in this world, hard as that was, and of course, in this moment too, riding a bike through the lonely continuum of time. He smiled at his knowing, where others couldn’t—or fucking wouldn’t, and he was right, and knew he was right, and always would be.

He rode on, his arms still there, to the sides of him, and he said, come, cover me. Gliding and dipping and soaring, and we do, going on and on, down a lonely, long road, and free now, or at least so he thought. Free and wanting.

And who among us would not say, such a person as this.

He turned and smiled, reaching his hands up to the breaking blue sky, and he said, yes yes yes, I am here now.

On either side of the road started to appear large outcroppings of shield rock streaked with black and pink and where alder bushes, raspberry bushes, and trees grew from crevices.

He saw ancient trees grown too tall and heavy for their rocky moorings, having fallen onto their sides, great circular walls of exposed roots and dirt pointing to the sky.

He rode past dark and vacant lakes, and he rode past narrow long stretches of washed-out lowlands, sun-bleached trees still standing, dead and broken.

He was tired, and walking the bike now, the sun not yet down, the moon there, and he looked up to it, and he said, love under a big moon.

Why wouldn’t there be?

Of course there would be.

Probably was and just forgotten.

He stopped and looked around, and he thought, what else might be out there?

He looked back up to that everyone’s one big moon. Ain’t that right, moon?

Ain’t it now, said the moon back to him.

True enough, and always will be.

And he was happy, walking, a coyote following him high up on the granite ridgeline, stopping, looking too, at that everyone’s one big moon.

He came upon a house set back from the road. He dropped the bike and walked up the long gravel driveway.

The house was white stucco, cracked and chipped and stained with dirt. Tall weeds running up the walls.

To the right of the house, a clapboard garage the same color as the house.

He looked for a dog, or any sign of a dog. There wasn’t one. Not that he could tell.

He walked to the garage and stopped and looked back at the house. He reached for the garage door handle and pulled, the door lifting up from the ground toward him, a stack of aluminum folding chairs tipping over. He paused, holding the door handle, two weighted cylinders filled with rocks, one on either side of the door, swaying from thin strands of twisted wire.

A second-story light came on and he let go of the handle to see if the door would stay. It did, and he moved toward the back of the house.

The back light came on, mosquitoes swarming the brightness. An old man wearing pajamas and a frayed striped bathrobe appeared. His grey hair disheveled. His watery, hooded eyes, squinting. A single-barrel shotgun in his hand. Who’s there?

He pushed open the screen door to the hum of the evening heat and the sound of the mosquitoes bouncing off the glass of the small light. Well?

He stepped onto the porch boards, the screen door slapping shut behind him. I won’t ask again.

He walked forward and Leonard stepped out from behind the house, wrapping his left arm around the man’s neck. Shh, he said.

Leonard pressed the cold tip of a clip-blade knife to the man’s throat. It’s me.

The old man. Who?

The one ya been waitin for, and he ran the knife through the thin, slack skin of the old man’s neck.

An old woman called from the house. Horace?

He looked to the second-story window.

Is everything all right?

He stepped over the man bleeding out beneath him and he entered the house.

The old woman appeared at the window, the soft bedroom light behind her highlighting the frailness of her thin frame beneath her long white nightgown. Horace?

Leonard appeared in the window, approaching the woman from behind, the old woman turning, and screaming.

He woke and sat up in the old couple’s bed and looked at the woman beneath the window on the floor, her nightgown soaked in blood, a long stream of it having run from her. He turned on the bed and placed his boots on the well waxed hardwood floor and he lowered his head and closed his eyes and ruffled his hair. He looked up at an antique vanity desk across from the bed.

He sat on the chair and opened a jewelry box and ran his fingers through it, an old broach, a charm bracelet, several pairs of earrings, a pearl necklace and matching pearl earrings. He fisted it all and put it in his coat pocket. He looked back at the old woman and stood and walked to her.

He squatted and took her left hand into his, sizing up her diamond ring and wedding band. He tried to pull them off. They wouldn’t come. He pulled harder. He took his knife out and opened the blade. He folded back the other fingers of her hand and pressed her hand to the floor and pushed the blade through the crunch of bone. He slide the rings off the backside of her freed finger and dropped the finger to the floor. He cleaned the blade on her nightgown and folded the knife closed. He tilted his head, looking at the old woman’s opened eyes, and he wondered, what was in there still?

Would it make a difference?

I bet they’re thankin ya?

Bet they are too.

He stood and pocketed the rings, and he walked down the stairs.

No doubt. Everything else is just made up, ain’t it?

True enough, just made up. Heaven or hell. Except I ain’t, and I never will be.

He lifted the kettle from the stove and poured out the water and refilled it. He placed it back on the stove and looked in the fridge. He closed it and walked out the back door.

He stepped back over the dead old man and the patio stone blood and walked toward the garage. He lifted the garage door and looked at the cluttered mess. There wasn’t even a car. Nothing much there at all.

He walked back to the house and up the stairs and walked inside.

He lifted the whistling kettle from the stove and searched through the cupboards until he found a jar of instant coffee. He made a strong mug of black coffee and carried it to the table. He sat and crossed his legs and took a sip. He lit a cigarette, and he smoked, and he drank his coffee.

Love under a big moon

That’s what he thought.

Torrents of Our Time: Twenty-Two Stories by Christian Fennell 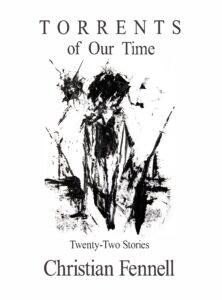 Christian Fennell's debut book, Torrents of Our Time, a collection of 22 stories, is being released by Firenze Books, October 1, 2020.

Read Next: THE PRIVATE MUSEUM OF MISS MARGARET by Zhu Yue translated by Jianan Qian and Alyssa Asquith