THE SURPRISE by Aisha Hassan

The funeral prayer was almost over but I didn’t care, and Safia needed me here, and since she’s the one who did the dying, her word is as good as God’s. I stood at the back so the rows of hunched women would ignore me for now. The mosque was bloated with hot air and I could smell sweat blooming beneath white prayer robes. Rotting hearts, too. I imagined Syed’s heart, fleshy and dark, emitting the stench of a hammered mouse, thumping inside his hairy chest. He was on the other side of the partition where an Imam’s voice sang for all the men to see and all the women to listen.

Everyone lifted their hands in a holy salute and bent down in prostration. I followed instinctively but was, as always, a beat too late. When I sank to my knees and touched my head to the ground, I pressed my face to the heel of God’s boot and said a little prayer: “Forgive me, sister.”

The women wouldn’t come near me as we walked to the cemetery. Still, I could hear the low hum of their voices and tried to hold my head high. Up ahead in the ant trail of people trudging behind the coffin, Mother kept bumping into those around her, stepping aimlessly, blinded by grief. She didn’t know I was here yet. But Mother has always been unseeing about her daughters no matter what happened to them. Even when the village and its birds seemed to know. Like her, they turned away.

Mother didn’t even look at me the day I tried to say goodbye. Didn’t even twitch when Syed, only thirteen then, stumbled in, took stock, and hissed, “Father was right about you,” before bolting out the door.

That day, Safia took my hands the way she did on those deep mornings when rising from bed made me feel more dead than alive. She promised never to abandon me while clutching my fingers tight.

“Sister, please,” I begged. “You can come.” We could have survived together.

Safia looked at me with moon-wide eyes that caught the light just as her head shook the quietest No. She glanced at Mother then turned back to keep her gaze on me. “You need to leave before Father gets home,” Safia had said. “Syed is already running to get him.”

Last Spring, exactly five years to the day I left, Safia finally called and told me Father died. We cried because he was gone at last and we had missed each other deeply and often. I cried because the fear of Father dragging me home fell out of my bruised insides and Safia’s voice sounded like forgiveness. I let myself imagine, for the first time since I ran out of the dusty village, the bougainvilleas in full bloom, our rickety house unloved and pathetic behind me—I let myself imagine Safia and I could be together again.

Just last week she told me that Syed, who carried Father’s shadow inside him like a ghost, was joining the military this month.

“I’ll come visit you when he leaves,” Safia said. “Mother won’t stop me.”

“Me neither,” she had said. Her voice was pregnant with hope.

And here we were, together again, as they lay her down beside our Father.

I grabbed a handful of dirt and threw it into the newly dug grave. The others were already leaving. I stood my ground and thought of Safia’s fresh body. In Islam, the funeral must happen as soon as possible. It spares the soul the pain of being trapped in a vessel that is no longer home.

“It’s her fault,” Syed’s voice chimed as the crowd moved past me. “But Safia was a silly girl to take a road she’s never travelled before, especially in the dark.”

A memory curdled in my brain of Syed’s small head staring from the doorway when Father beat Safia and I, and all the different ways his eyeballs said: Silly, Stupid, Girls.

I looked up and Syed sneered at me with a face sickeningly like mine, both our soul skins roasted to the same shade of ochre beneath the punishing sun. Syed nudged the old uncle he was speaking to and both men looked at me with narrowed eyes.

I wanted to strangle Syed’s slimy voice. It was the same voice that told me two days ago Safia was gone and if I didn’t come home, he would leave Mother to fend for herself. “Safia was going to see you,” Syed said when he called. “Didn’t you know?”

The police unlocked Safia’s phone after the collision and my number was the only one she ever dialled. Syed guessed it was me, but wanted to make sure I knew the details.

“Farah,” Mother said, just as I was about to act. I felt Syed watching as I turned to the frail woman who pulled up beside me. Mother gently took my hands. “I didn’t think you would come,” she whispered, glassy eyes melting. She ogled me as if unearthing something precious.

Mother nodded absentmindedly and started walking towards our house. “You are not the reason,” she said with her back to me. “You and Safia are the same, always blaming yourself.” Mother’s brittle fingers tightened around mine.

I pictured Safia staring into the darkness as Mother led me back home.

Aisha Hassan is a Malaysian writer and journalist. She previously worked for Quartz in New York and Harper’s Bazaar in Malaysia. Aisha currently works at a foundation that supports underprivileged children. You can follow her on Twitter @aishabhassan. 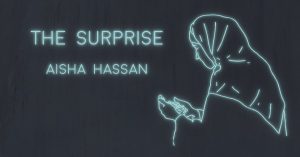 Read Next: A EULOGY by Michael Hendery