MY MAMMAW’S BOYFRIEND by Dalton Monk

He looks like Stan Lee. And we call him that behind his back. Stan Lee’s real name is Marvin. Right now I’m in Marvin’s truck and we’re parked at the grocery store. He goes inside, and I stay in the backseat of the truck, which is old, the fabric cutting loose in the corners. It’s full of long cucumbers and cobwebs and ants. And a putrid smell that can only come from an old man, specifically an old man that looks like Stan Lee and wears Stan Lee glasses. This is an old man I hardly know. I sit in the hot truck for a while, comparing this man I barely know who looks like Stan Lee to my Pappaw who is dead. Stories often spill from Marvin’s lips at the dinner table. He’ll say things like how he just about had to knock so-and-so’s block off and how he’d told so-and-so to get lost and how he, Marvin, was so suave. He has a grandson named Trevor that comes to Clendenin with his Tonka trucks and toys and his speech impediment. I can hear him now saying his own name and he sounds like this: Twevol. Marvin is old or maybe he just looks old. And all of us think Mammaw is out of his league, which is an interesting thing to think about your Mammaw.

So, here I am in Marvin’s truck. And I’m twelve and the backseat smells and I’m sweating from the summer heat and closed doors and from being surrounded by all the odd-looking vegetables.

But I’m remembering now. I’m not twelve. I’m twenty-four. And that truck probably now belongs to Marvin’s son or maybe even his grandson Trevor who says his name like this: Twevol. Or maybe the truck sits in a junkyard, still filled with vegetables, still just as ripe as ever. Or maybe another old man bought the old truck and he’s dating someone else’s Mammaw and maybe he also looks like Stan Lee.

Marvin doesn’t own the truck anymore because Marvin is dead. He fell off the roof of Mammaw’s house—I don’t really know what he was doing up there except trying to prove to Mammaw what a man he was. I imagine him saying something like, “Look at this, this’ll be a story, won’t it.” And it is, I guess. He fell on the gravel beneath the gutters where my cousin Daniel and I had, just earlier that summer, picked up the smallest rocks and tried to throw them into the Elk River.

But this is where the old man named Marvin who was dating my Mammaw and who looked like Stan Lee fell, where the pain caused him to go into a coma, where the healing caused him to get better, so much better that he was at the next Thanksgiving dinner, telling stories that all of us knew were lies, where the healing then turned back into something that was killing him, something that made him go back to the hospital, which is where he died, but here he is, actually, not dead, but very much alive, getting back into the truck with me in the backseat where I’m keeping my arms at my sides, a loaf of bread placed in my lap, and now here is Mammaw, who I forgot had come with us, and they’re both in the front seat smiling and the day is hot and Marvin starts telling stories and Mammaw listens and I listen and we both know he’s lying, but we hang on to every word because whether it’s true or not, whether he’s remembered something the wrong way or in a way that romanticizes everything, it’s a story, and it makes us forget about the sweat on our arms, the musty smell in this truck, and the death before us and the death to come, and we just breathe and we listen and we listen and we listen.

Dalton Monk is from West Virginia. His work has appeared in Hobart, New York Tyrant, and The Bitter Oleander, among other places. 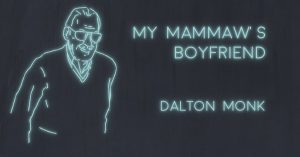