They put a bomb in my pen. It’s like that film Speed. In Speed, your man Dennis Hopper puts a bomb in a bus. Tells everyone as soon as the speedometer in the bus goes below 50 miles per hour, the bus goes boom. That’s what they did to my pen. If I stop writing, if ink stops leaving my pen, the pen goes boom. Bombs in buses, they do a lot of damage. Bombs in pens? Maybe not so much. But these days, who knows? I’m fucked if I’m going to stop writing to find out. My wrist is already hurting. Some of the other coffee shop punters are coming up to me and asking if I’m alright. They’re saying I look stressed. Wired. A bit on the deranged side. “Maybe go easy on the coffee,” they’re saying. “I couldn’t drink another one anyway,” I’m saying. “My hands are sort of tied.” “What do you mean?” they’re saying. I’m explaining. Explaining while writing. Explaining about the pen. And the bomb. And the inkometer. Sweat’s now coming off my forehead and my hand is smudging what’s on the page. They seem concerned, these coffee shop punters. Understandable, I suppose. I suppose they’re just like me – they don’t want blown up too. “Who’s ‘they’?” they’re asking. “What?” I’m saying. “Well, you said ‘they’ put a bomb in your pen,” they’re saying. “Who’s ‘they’? And how?” “You think I’m in a place to find that out?” I’m saying. “I’m just here to deal with the problem at hand, like Keanu and like Sandra.” They could do a runner at this point. They could leave me in here alone. Me and my pen and the bomb. That’s what they tell you to do these days. Run. Hide. Tell. I’m saying I’ve got a bomb in my hand. That could arguably be classed as terrorism. “I’m not the Dennis Hopper here.” I’m saying. I’m now finding myself a bit on the self-conscious side. Guantanamo Bay never featured on my list of dream holidays. Re-emphasis of my earlier Keanu and Sandra point is needed. “I’m Sandra fucking Bullock! I’m Keanu fucking Reeves!” This seems to be resonating. Amazing what a ‘fucking’ here and a ‘fucking’ there does. Luckily, they seem to have seen the film and know what I’m on about. “How can we help?” they’re saying. “Words,” I’m saying. “I need words, like Sandra and Keanu needed road.” Now they’re shouting words at me. But the words they’re shouting are some amount of shite and I can’t work like this. It’s all just free association, no sentences. “Pen!” “Bomb!” “Ink!” “Bleeding!” “Bleeding Ink!” “Pen!” “Somebody already said pen!” It’s like a gaggle of hens. I can’t write a gaggle of hens. Buck buck cluck cluck. See? Doesn’t work. “Stop!” I’m saying. My whole arm is seizing up now, but I don’t dare take the nib off the paper to give it a shake and a stretch. Everyone in the coffee shop has left their laptops to gather round my table. Twenty-five, maybe thirty punters. All of them trying to be the hero. “A different approach, please!” I’m saying. “Do the words need to make any sense?” they’re asking. I have no clue. “Better if they make sense,” I’m saying. “Just to be on the safe side.” There’s books. It’s one of those coffee shops where there’s book cases. “We could just read a book to you,” someone is saying.” Good idea. The consensus is that this is a good idea. They grab books. Piles of books are now everywhere around me. They start giving me options, shouting hundreds of titles at me. Fifty Shades of Grey is a popular choice, but I manage to overrule. “Read out one word of that and I’m blowing us all up,” I’m saying. There’s more debate. Debate about what type of book – poetry or prose, fiction or non-fiction. High-brow, low-brow. Some clown is still insisting on Fifty Shades, but common sense prevails, and the clown gets banished from the group and barred from the shop for life. We settle on… The Grapes of Wrath. Some punter is starting to read. “To the red country and part of the gray country of Oklahoma, the last rains came gently, and they did not cut the scarred earth. The plows…” “Wait!” I find myself saying. “I’m not sure about this. I think I feel my pen heating up. This is plagiarism. Maybe we can’t do plagiarism. Maybe the pen blows up if we do plagiarism!” “Fuck sake,” someone is saying. “I don’t remember the bomb on the Speed bus having this many rules,” somebody else is saying. “Yeah,” somebody else is chiming in. “That was the beauty of that film – the simplicity of the premise.” They’re all starting to chat among themselves now. They’re discussing Speed 2: Cruise Control and how it wasn’t as good as the first. How it especially suffered from not having Keanu Reeves in it. Now they’re weighing up the merits of Keanu Reeves as an actor. How bad Bram Stoker’s Dracula was. How good John Wick was. How he’s pretty much just doing Ted from the Bill & Ted films in every single role ever. “Can we please focus!” I’m saying. But the crowd is starting to dissipate and pair off and get their phones out to look up Dennis Hopper’s IMDB page. Somebody has brought me a chamomile tea. They’re putting it on my table and patting me on the back. I’m sipping it and admiring the amount of road I’ve just covered. That was a good wee writing session. And in the end, nobody got blown up. Same as in that film Speed.

Neil Clark is a writer from Edinburgh. His first story collection, Time.Wow., is out on Back Patio Press in 2020. Find him on Twitter @NeilRClark or visit neilclarkwrites.wordpress.com for a full list of publications. 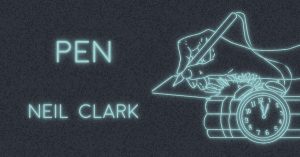 Read Next: HAP’S by Wilson Koewing