SATURDAY NIGHT (AT THE ER) by Fran-Claire Kenney

Fran-Claire Kenney is a Queer writer, filmmaker, and student based near Philadelphia. Her work has appeared in Coffin Bell Journal, New Pop Lit, and Wards Lit Mag, and she has been awarded by The Short Story Project. Kenney is on Twitter, YouTube, and probably the couch, as well. 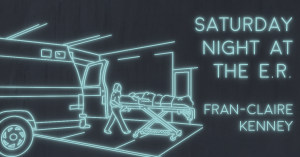 Read Next: THE PULL by Ann Kathryn Kelly