Meet me @ Aquarium, he texted. By jellyfish, 7. She would perhaps, most likely, but not before researching jellyfish, for she knew his habits, the way he liked to make it impossible for her to say no wherever they were.

Adults spawned daily if given enough food, and for most, spawning was triggered by dim light so the entire population bred every day at dawn or dusk, floating through water, dropping eggs and sperm, tentacles (though she preferred tendrils) never touching. While most men she’d known like to roll against her in the morning, he was a night creature. Fortunately, for him, she was not bound by time.

In a few species, the sperm swam into the female’s mouth to fertilize the eggs. She knew he knew she liked him between her teeth and indulged her in a way most men would not. At sixteen her lips took over in the backseat of a baby blue Trans Am, and they quivered for days.

She could never open her mouth without thinking of possibility.

Chella Courington is a writer and teacher whose poetry and fiction appear in numerous anthologies and journals including SmokeLong Quarterly, Gingerbread House, and Potato Soup Journal. Her novella-in-flash, Adele and Tom: The Portrait of a Marriage (Breaking Rules Publishing), was featured at Vancouver Flash Fiction in August. Courington lives in California. 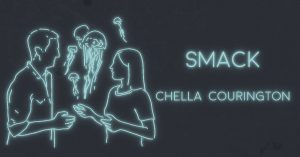