THE CLOCKMAKER by Lucy Zhang

Far away—further than the deli store only frequented by the patrolling police officer and a few custodians, further than the farm with three cows and a horse and several chickens guarded from preying hawks by a fishing line ceiling, further than the white oak tree and its branches striking outward, and certainly much further than the borders of the city—is a cottage. Planks of wood bar the windows shut; mold creeps across the brick walls; pipes wind down from the roof to the ground, and the sound of water dripping on metal beats steadily to the murmurs of wind against loose shutters.

Don’t go there, it’s dangerous, parents tell their children. The parents think the basement must be full of human limbs hiding in coffins, cleaned and dusted daily, the work of a madman. They think the cobwebs are part of the madman’s machinations–to prevent anyone from looking further and seeing the incongruous gleam of a lab of bodies, the sanitized Erlenmeyer flasks, the flame of a Bunsen burner, the yellow glow of liquid metal held in a crucible. The parents think their children will vanish should they take one step towards the cottage, bodies never surfaced, and the adults will be forced to live on silently, listening to the rhythm of the morning forecast and traffic jam, holding their breath when the newscaster mentions a child kidnapping off the streets of their city, grinding their teeth at night when they dream of their shame–the shame of losing a child to a reason they can’t put into words. So they live silently.

Among the children, a few know the truth: the cottage houses a clockmaker.

The clockmaker cuts and sands the teeth of his own gears from wood that he later stains and seals to shield them from the years to come. He knows the escapement wheel must be cut perfectly, or else the clock might skip teeth, might not run, and time stops for someone.

One day, a girl ends up at his door. He is assembling his clock with dowels, adjusting the escape wheel until the pallets ticked and tocked against the teeth without seizing up when he hears the knocks. He pulls open the door, a creaking monstrosity he prefers to keep shut. The girl asks for a job. She says she wants to learn to build a clock so she can gift one to her family for the holidays.

They don’t already have a clock? he asks.

Only one in their bedroom. None in the kitchen, even though there is plenty of space on the wall beside the parrot ceramic tiles and free grocery store calendar.

You’ll have to walk all the way here every day in the cold, he warns. The tips of the girl’s ears are bright red, and he wonders if she can feel her feet in those perforated fabric sneakers meant to let feet “breathe.” But the girl stands in front of him, head over her shoulders, the top of her shoulders over her hips, unwavering in her posture despite the wind cutting across her back. He admires her resolve and finds himself unable to say no. Not after years of living alone, secluding himself with his craft, immune to the city’s noise.

Making clocks here is dangerous work, he tells her on the first day. Everything needs to be handled with precision, or else your clock won’t function.

The girl nods as she begins to draw two concentric circles on the Alder wood sheet with the stub of a pencil, his only pencil. He no longer needs to sketch, the pattern now ingrained in muscle memory. He watches her lift the tip of graphite again as she marks off lines with a protractor every thirty degrees, connects the intersection points for the teeth, attempts to correct the uneven line of a tooth when her grip falters, sharpens the edge, cleans the line again so there’d be no confusion over which line to follow when slicing through the wood. The teeth need to be the same size, he tells her as she begins to saw through wood. It takes ten tries—ten abandoned wheels—before the girl gets it right.

When they take breaks to wash their hands of wood dust or stretch their backs and necks hunched over more often than not, they sip Lipton Black Tea out of Styrofoam cups while eating graham crackers, the sole snack in his cabinets. The girl speaks little but listens to him with an unfamiliar attentiveness—the kind where people don’t quite make eye contact, but look up at you with wonder, and somehow they forget that their leg is bobbing up and down or that their tea has gotten cold—and he feels flattered. He tells her how he has long forgotten how he came to stay at this cottage, how he sells clocks to ghosts lost in their time, how he saves souls from wandering and waiting when the pendulum halts, how he has not aged in years. In turn, she tells him of how she would cook chicken stew with more potatoes than chicken because russet potatoes are filling and cheap, how at eight pm she’d reheat up the stew for exactly two minutes in the microwave so the food would be warm when her parents came home, how she’d eat the leftovers the next day when she realized her parents did not return home on time and must’ve gotten a takeout meal instead. She tells him of the one time she could not find her stuffed rhinoceros and later discovered it suffocating in a trash bag left outside the door for Goodwill, so she rescued her rhino and rubbed its soft body against her cheek and nuzzled her nose against its stomach, which smelled of cotton and old shoes, before returning it to her bedside so it could sleep.

The girl finishes the clock early spring as a belated Christmas present to her parents. Flowers blossom on the once barren trees, the mold on the walls that once looked black lightens to green, and the cottage no longer appears haunted, but rather like a place where children get spirited away by faeries. She holds the clock under her arm, gripping the bottom edge until the whites of her knuckles contrast her pale skin. Good luck, the man tells the girl, wondering if he’ll see her again.

To his surprise, the girl returns the next day with the clock. It stopped working, she says. He looks at the clock. The second-hand makes its way around the center in one quiet sweep movement; the minute hand adjusts itself forward. The girl follows his glance. It wasn’t working a few hours ago at home.

Then we’ll just have to make another one, the man says without noticing pollen drift from the clock’s frame onto his finger. It is always winter to him.

In the city, where the days are a bit longer now and cherry blossoms bloom along the apartment sidewalks, a family disassembles a bed and places it into a cardboard moving box for Goodwill to pick up. They briefly wonder how the stuffed rhino made its way back to the bedroom before placing it into a Glad trash bag of children’s dresses and sweaters. It has been almost two years since their daughter went missing and the mother and father know better than most how time heals many wounds, but not all. It has been one month since the police reported their discovery of a girl’s body, dead from hypothermia. It has been one day since they could no longer silently listen to the morning forecast, the sizzle of eggs against oil, the carols of robins roaming the streets for food. The family thinks of moving far away—to leave it all behind.

In the cottage, a man and a girl build clocks. When winter returns, they sip hot Lipton Black tea and tell the same stories to each other, as though the season never dies off only for another to follow in its demise, as though time has never passed. Because it hasn’t. Not for them.

Lucy Zhang is a writer masquerading around as a software engineer. She watches anime and sleeps in on weekends like a normal human being. Recent publications include: Porridge, Ligeia, Ghost Parachute, Twist in Time, MoonPark Review. She can be found at https://kowaretasekai.wordpress.com/ or on Twitter @Dango_Ramen. 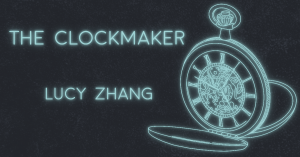