THE HANDS REMEMBER by Andrea Rinard

I sit on the bench outside Publix. A little boy ran by me in light-up sneakers when I was almost, almost, almost to the door, and suddenly I could hear Caleb’s feet, encased like two meat loaves in the shoes I got him before he started K-3, drumming against the cart. He was so careful not to kick me after that one time–Don’t hurt Mommy!

I’d had to let go of the cart and sit down because everything was narrowing down to a tunnel with Caleb at the other end. I tried to count my breaths, and I told Tom to just go, just go, and he didn’t ask what the trigger was. He just went through the sliding doors into the grocery store.

I hold the memory the way Caleb’s chubby fingers would grip the handle of the cart, my fingers closed around themselves like a puzzle. Caleb used to crack himself up, asking for silly things for dinner. I want toilet paper to eat! I’ll eat it all! And he’d cackle and I’d laugh and we’d putter around the store, doing the things that only the two of us in the whole world do, but now I’m doing the breathing stuff Dr. B’s been working on with me.

In. Out. In. Out. Feel your lungs expand. I can’t go in the store. Can’t. Can’t. Can’t. Tom says won’t, but it’s not that. It’s just a word, but it’s a word that he’s pushing around with the cart right now, filling it with meals that he’ll prepare, and I won’t eat, and I can feel his rage from where I’m sitting. I have no room for anger, though. The despair is too big and too heavy. There’s no space for anything else.

It’s been three months, he’d said. Fifteen weeks and two days, I’d said, and his jaw did that thing that was new like so many other things that were new since Caleb left. Died, Dr. B’s voice shoves me, but I whisper left. I don’t like the vocabulary I’m asked to use—words like trigger, mindfulness, ruminative coping, adaptive grieving, and bereavement pathways–so I don’t. So stubborn. That’s new too.

Something nudges my ankle, and I look down. There’s a collarless little dog sitting by my right foot, a brown terrier mutt. It looks like Toto but brown and not quite like Toto after all.  It’s looking up at me, and I recognize him immediately. If I hadn’t been looking, I wouldn’t have seen him. Caleb, I whisper, and the little dog wags his tail and lets me stretch my hands around his warm belly and lift him to my lap where he perches like a toddler.

There’s a fat tick under his left eye like a gray teardrop, and I pinch it off. All that stuff about matches and tweezers is unnecessary. You just have to know what to do, and my hands remember. Like holding a newborn with its head like a giant flower on a narrow stem or rubbing a sweaty back just right after a nightmare or cutting a sandwich into two perfect, crustless triangles. It’s been fifteen weeks and two days since they’ve had work to do, but my hands remember. As the dog and I gaze into each other’s eyes, I know he remembers too. Caleb.

Tom doesn’t know how to say no to me anymore, so the three of us go home together. Tom calls it a mutt, but Dr. B calls it an affirmation of life, so I win. She suggests so, so, so gently that I find a different name, a name that will represent this new chapter in your story, but it’s Caleb, and I don’t even care how Tom winces every time I call him to me. I don’t care that the house echoes with his anger. It’s just a dog! But I know what’s real.

He makes me choose after twenty-seven weeks and four days, and it’s not a choice. I don’t even need Dr. B anymore. Caleb and I sit on the couch together while Tom packs a bag. I’ll be at my parents’ until I find my own place. I’ll get the rest of my stuff after I figure out what I’m doing. I feel bad for him, but I already know what I’m doing. I gather Caleb up in my arms, and he doesn’t even wiggle much as I hold him tight against my breasts and rock back and forth, enjoying the silence with my little boy.

Andrea Rinard is a veteran high school English teacher whose midlife luxury is writing. She has work in some of her favorite literary magazines, including The Jellyfish Review, Spelk, and Crack the Spine, and her YA manuscript recently won the Key West Literary Seminar’s 2020 Marianne Russo Award for a novel-in-progress. A native Floridian who wears shoes against her will, Rinard lives in Tampa with her three kids and her 1988 Prom date. You can find her online at www.writerinard.com and on Twitter @aprinard. 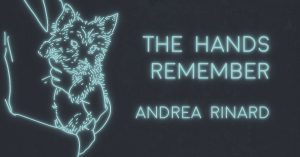 Read Next: EVERYONE TO BLAME by Jason Teal

Jason Teal
MARKS by Monica Dickson
AFTER A MONTH, WE MEET FOR DINNER by Francine Witte