THINGS TO SHIP TO AMERICA by Jessica Evans

Is heaven a proper noun?

Here, I learned to love myself. To love the thick full shimmy of thighs against one another; to appreciate the height of my traps compared to the valley of my clavicle. I fell in love with butter churned from cream produced by cows who live only a few kilometers away.

I learned to seek out the salted rotisserie chicken, its skin crispy and shimmering after hours on a spit. As much to bite into something with savage need as because there’s ownership that comes from eating simply to eat. But chicken is only good when washed down with room temperature fest beer, brewed like their ancestors and consumed within modernity in overcrowded but not too autophobic beer tents where everyone knew everyone else, except for us because here we are, moored inside something that looks like expat living but is actually attempts to recreate America whenever possible.

Our circle within a circle confuses even us. We drive roundabouts and autobahns and pay tolls on roadways, deposit euro coins into bathroom vending stalls so we can enter and not be able to tell the attendant there’s no soap, the water is too cold. We recede into the background if we’re not on post.

We become obnoxiously loud and boisterous, the kinds of Americans who boast about a war that ended seventy-five years ago, who consistently remind the local populace that had it not been for us, the entire world would look different, feel different, be different. Well. That’s so consumable and true and entirely false that the congruencies between understanding now and then becomes complex and altered so it’s easier to reach for another warming beer.

We travel, we rove, we move, searching for something that feels like home but gives us enough space to learn to grow. I take moments for myself, carve out instances in which I can identify as myself and not (just a) spouse, my own person, my own truth, my own evocation:

Mornings when the moon is bright, and there’s no one else in the forest so I can turn off the headlights and pretend I’m a real forest witch.

When half my drive has no cell signal, so I’m forced to sit in silence, contemplative, and settled.

Looking for the quiet markers of age—the creasing of an elbow joint, the slow upstart of lifting from a chair, I settle into this time-space, being the preemptive feelings of being nostalgic before it’s time.

And in nostalgia for here comes past-longing for forms of then, tangible or  esoteric, the kinds of memories that come unbidden:

Dima buying a bedroom set, Ken buying an air mattress, his aging skin that looked like leather from a distance and felt even more snakish next to mine. The first two airmen I slept with, their introductions into my life only a half-week away from one another. The expectation that eventually, I would find myself grown, polished, and with a family to support.

A mother, two toddlers, and an infant strapped to her chest, EPT test in hand as she sets down birthday candles, plastic party favors, sweets and treats onto the conveyor belt, her hand clutched around her wallet, head constantly evaluating her two small humans, looking for relief and answers and silence. And I watch her watch that which she’s produced and clearly her womb isn’t hollow, her tribe is continuing to grow, (though I sense that she gleefully accepts the silken luxury of sitting in a bath in solitude, or spending a morning reading and drinking coffee, luxuries that she’s never going to be able to afford, not now, not with her progeny continuing to propagate and just once), I want the openness that might come from being able to reproduce; mitosis at its very core, a concept that has both alarmed and paralyzed me, left me bereft with longing and sighing with relief.

Bushmills Original only in basement Irish bars watching soccer and listening to 90s “classic rock” while we’re both recuperating from the walking and the sleeping outside of our schedule, the constant seeking of something that we’re certain, if we just keep traveling, we’re going to find. In these basement bars, we avoid serious discussions, like what’s going to happen when we never have children, and how should we deal with deployment, or our next concrete steps after the army, after uniform, after boots. Instead, we talk about the better band and I toss out suggestions, none of which are ever, ever better than Nirvana. The light is low, which hides the shimmer strands of grey that color both of our heads, our lines from lack of sleep, hollow nights lost to wonder and worry.

Glenfiddich, good for dessert cheese plates when we’re feeling fancy and pretending like we were born fluent in sophistication, though communism and generational poverty rarely suggest a fluency in anything but loss and longing.

Paddy and Red Breast for those nights when we’ve finally made forever friends and we can just be loose but that would require us to be in a place longer than a tour and we’re both so hard to get to know that ultimately, we learn to lean into our own patterns, create tradition that can exist outside the need for friends

Querceto Chianti that’s a little overpriced paired with Italian food that a chef didn’t prepare but we’re hungry and trying because it’s been a long weekend full of unknowns because we’re on the way to listen to a symphony, something purchased well-ahead of time, that Sunday morning when we planned the trip to Salzburg; when it felt wrong not to include a small dip into the sort of chords that make each of us whole.

I’m sitting in a 17th century palace where Mozart first performed, watching a small group of students play a selection of winter music. Two whiskeys and two wines in and the viola player looks exactly like a powerlifter I used to fuck but can’t remember his name. Exactly like him, even down to the shape of his nose, the way it meets the beginnings of his lip because I used to think it was so endearing that his youth meant he couldn’t grow a beard (and even in those endearing moments I used to find a slight smidge of pleasure at knowing even at my age, I could still pull one so young; but that was always accompanied by the idea that at my age, I shouldn’t need to pull because I should be settled, which would revolve like glass doors of emotions that shouldn’t be examined or even seen during the middle of a little better than average sex) so in the palace, for the next 90 minutes I focus in and out of trying to remember what his name might have been, studying this Austrian’s face for similarities to the Ohioan kid, but now I’m thinking maybe he was from somewhere north in Ohio where they’re committed and focused on OSU football because their small towns are devoid of industry and therefore absent culture or other events. I can remember his numbers; he was a beast on bench, pushing with ease and his youth made it so he could easily shed weight before a competition or put big gains on the bar without really struggling and I always wondered what someone so objectively physically gorgeous was doing with an old lady like me, until I realized from his perspective that I was the one who had my shit together; early thirties graduate student who could afford an off campus rental that came with a driveway and a basement, two gym memberships because I was just that serious about making myself into what I wanted to see. One day, he came over, residually stoned and hiccupping about not being prepared for his next day and all I could think was how delightfully not serious it must’ve been to just exist for one single day.

At the palace, I’m flanked on either side by two pregnant women and their presence makes my womb ache in ways that feel hollow, mountainous, bereft.

I watch my husband watch a promising Virtuosos whose hair reaches her hips and whose lace cuffs land delicately on violinists’ wrists. He leans in, whispering between Vivaldi’s notes, that our daughter should play, too.

And I want to tell him that we’re both getting old, geriatric for conception, so maybe that very pressing desire needs to be butterfly-fleeting, the way spring sunlight can’t be captured, the way trills and scales feel real and immediate in the moment but whose notes eventually, ultimately, finally, fade away.

The Heart of Joy premier vegan but we’re starving and don’t look at the menu because it’s snow-raining and we’re more attuned to fashion and photos.

A runners’ body, the server’s face

Jessica Evans is a Cincinnati native who practices making a home all across the world. Currently, she’s working on establishing roots in Washington DC. She’s the Associate Editor for Headline Press. Connect with her on Twitter @jesssica_evans. 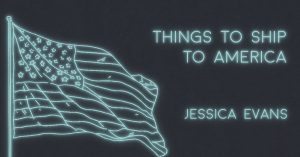 Read Next: WHO LET THE DOGS OUT? by Josh Olsen