My uncle lost his leg in a motorbike accident. It wasn’t his whole leg, just half of it. And it wasn’t lost either, the doctors cut it off, but that’s what everyone whispers: He’s lost his leg, and then they cock their heads to one side and sort of smile.

As I’m buying grapes for the hospital visit with my step-mother, the lady at the check-out makes the same head movement. She comments on how much my step-mother and I look alike. When I open my mouth to explain, my step-mother prods me so the lady can’t see.

“Oh, I’m not his mother,” she replies. She sniffs and holds her head up as she hands over her money. “His mother left him.”

“Awww.” The check-out lady cocks her head and sort of smiles. “He looks like he’s doing well though, doesn’t he?”

When we arrive on the hospital ward, we have to huddle around my uncle’s bed with the rest of our family. We squash together because the curtains have been drawn to give my uncle some privacy. There are twelve of us. Or eleven and a half if I count my uncle properly. No one is speaking. My uncle looks as though he’s asleep with his eyes open. The blanket that covers him is pulled up to his chin and tucked under the mattress on all sides. It’s flat against the bed below one of his knees. I count two times where someone feeds him Lucozade from a plastic cup, and four times where my nan leans him forward, plumps up his pillow, and drops him back against the bed; to make him more comfortable, she says.

Everyone avoids looking at the space where my uncle’s leg should be. Instead, they pat the back of his hand and point out how many “get well” cards he has (seven), and swap out the uneaten bags of grapes, for fresh bags of grapes. I stare at the space on the bed and wonder who has the piece that’s missing.

It’s a few months before my uncle is allowed to leave the hospital and when he does, it’s with a leg made from plastic and metal that he keeps hidden from view beneath his jeans. On the surface it looks like he has a normal leg, but now he limps when he walks. That’s when you can see that something isn’t quite right.

I watched him take his false leg off to change his dressings, which was a big white sock pulled up over his thigh. The stump of flesh moved up and down like a normal leg but without a knee, shin or foot attached beneath it.

I don’t realize I’m staring until he catches my eye. Then, I cock my head to one side and sort of smile.

Steve Campbell writes short fiction which has been published in places such as Spelk, Fictive Dream, MoonPark Review, Molotov Cocktail and Flashback Fiction. He’s Managing Editor of Ellipsis Zine and is trying to write a novel. You can follow him via twitter @standondog and his website standondog.com. 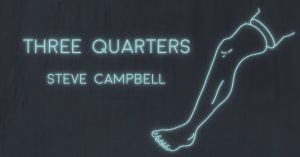 Read Next: I AM SPACE MAN by Amanda Tu