TO THE RESIDENTS OF NINETEEN-SOMETHING WEST NELSON by MK Sturdevant

To the Residents of Nineteen-Something West Nelson,

I had sex in your living room. At the time, it was a fetus of a room, a zygote of a house. Your living room had just been set on its paved frames and caissons like a mother hen about to lay some furnishings. You know those tall, narrow windows trending in the new builds around ’07? The streetlamp light was gushing in, there was no glass, just these wings of Tyvek flapping like a slack sail at midnight on the open sea.

We had gone for sushi in Bucktown. We were both nervous types, easily made brave by unconscionable amounts of sake. We chilled out, warmed up, got ideas. ‘Ah now,’ he said. When he said ‘now’ it sounded like ‘nigh.’ ‘It’s my first project, like.’ He said it and made dimples on his cheek. Then he put his cup down. ‘Come on then. Let’s have a look.’

We had sex in your living room, and even though I haven’t gotten to that part yet, I want you to know about it. Right away. I was the first. To have sex in your house. Before you did, I did. Right there in the living room, where you may be sitting now, with heavy, non-modular furniture, wishing you were having sex with him, too. His family were all farmers, and when he was about seven he got his leg caught in a combine and nearly died. Years later he could run again, he even ran a marathon. We went running together. Once my shoes were dirty and I was banging them on the sidewalk to knock the mud cakes off before I went up to ring the bell at his apartment. He came out and said, ‘I thought some eejit was out here knocking. But it was just you, clattering the bejeezus out of your runners.’

Well, the sex in your living room was great. We weren’t comfortable, but the situation had a feeling of surprise and sexy special circumstances. I think this is what sex requires. It was on a palette of drywall. We were directly in the middle of your main room, maybe a bit towards the east wall, heads to the south.

It wasn’t just the ambiance of the Tyvek wrap and the drywall, though. We had been talking at dinner about whole cities burning down. We were enthusiastic about this bond we shared, the Great Chicago Fire and the Burning of Cork, and despite it not being 1871 or 1920, we were having a passionate historical discussion about devastation and pride and human triumph, while drinking, so.

The stairs weren’t done while we were in there ripping our clothes off. Just these pits and gaps, marked everywhere with yellow tape. We walked all over your house afterwards. He told me how it wasn’t supposed to have four bathrooms, just a master, a regular, and a powder, but you wanted another powder in the basement. So you got it.

Do you gasp for pleasure while looking at your ceiling? I did. Above and behind your ceiling there are these planks with spray-painted instructions about electrical lines. You know this on a theoretical level maybe, but you haven’t seen them, the raw planks on a Friday night, beached whale bones organized into a grid, a luminous ribcage in the dark, exposed to the open air and city lights.

I saw your specs about the kitchen countertops by the way, christ jeezus. Not long after he built your house, our apartments got too expensive. I had to move farther north, and after the crash of ’08 he moved back ‘over home,’ he called it. There’s nothing affordable. They say soon there won’t be sushi, either, you know that? Different reasons. Sort of.

If you put this down a second and walk over to your fireplace and run your hand along the wall behind the mantel, there’s a beam back there where it says m & m 2007! xoxo, and, no new fires!

After we capped the giant Sharpies and put on our shirts, we jumped out of your plywood front door onto the dirt where your steps would be laid. He said he just hoped you really lived in it and stayed there awhile. Then showed me his name printed on the permit tied to the fence out front.

Don’t move out. Don’t keep moving. Use the fecking fireplace then, he said to you when you weren’t there. And use the walk-out over the garage. He was totally knackered after putting the fecker in. To spec, even. Might’n put him over budget, he added.

Think of you in it, think of us gone. Don’t let it rust away; go out there to your magazine roof and have sex and get high or call your mother or something big like that. Invite underpaid people to live with you. Deliver a baby up there. You know, Live, like.

MK Sturdevant is a philosophy instructor and freelance editor in the Chicago area. Her work has appeared or is forthcoming in Orion, Newfound, Kestrel, Alluvian, Lily Poetry Review, NUNUM, and elsewhere. She is a fiction reader for the Maine Review, and sometimes tweets @mksturdevant. 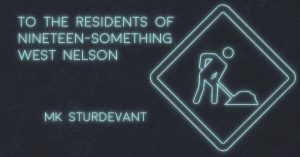 Read Next: THE HARVEST SEASON by Brian Morse