Nestled in his sleeping bag, Randy had fallen asleep alone under the desert stars, but here is stirred by a slithering along his naked thigh and a rattle under his armpit. Half asleep, he imagines he’s dreaming, but a Stone Age part of him wrings his spine and cascades adrenaline. The rattlesnake brushes Randy’s ankle and traces halfway up his ribs, so smooth and cold he wouldn’t have placed it but for the harrowing sound. A collision of fear and logic keeps him rabbit-still. The slick, thick thing slides across the old bruise left by Phil’s wingtips and curls around Randy’s heel, then brushes the arch of his foot. It tickles, goddamn it, and his foot jerks. A radio-static rattle as the diamondback roils against the bag.

“No please God no,” Randy whispers.

He spies his iPhone ten feet away, beside a saguaro, and pictures his F-150 at the trailhead.

Maybe it’ll leave on its own.

He sniffles the cold snot in his nostrils, senses the chill in his earlobes too, and it hits him: his bag is the warmest spot around. The snake isn’t leaving. Warm panic simmers in his chest and he laughs morosely. “Exactly what you want.”

Slowly, he brings his hands to his collarbones. The bottom of the bag, yellow in the moonlight, undulates and swells as the thing settles around Randy’s feet and lays its weight across his ankles. A quieter rattle, like the trill of cicadas.

It’s not here to bite me.

Randy thinks of his phone and the text messages on it. And the opinions and lives that would be forever changed if those messages were found. How he’d flung his phone from this spot after Phil’s last text at 10:16 p.m.: U ARENT WORTH THE WAIT. If only it were closer now. Phil would know what to do, he’d handle this.

Randy pushes up gently against the bag, exposing his chest to cooler air. A breeze washes the sharp scent of desert sage over his face. He inhales, but then he blinks at something in his eye and his nose tingles; he rubs it and pinches the septum, but blurts a sneeze that quakes his body. The snake writhes and its rattle screams like a whirring fly reel as it lashes Randy’s ankle; Randy pisses himself.

A klaxon ringtone blares. Randy cranes to the flashing amber light and knows it’s Phil, and wonders what he has to say for himself. It sounds five, six times in succession and he knows Phil’s drunk again. He’ll think Randy is ignoring him. He’ll get spiteful. Dangerous. A snake without the courtesy of a warning.

But at least Phil is awake.

“Hey! Fucking Siri!” The snake coils around his right ankle and constricts in pulses like a blood pressure sleeve.

“Oh, that’s your name? Hey Fucking Siri, get outta my bag.” He squeezes his face; this was to be time away from Phil––self-reflection under infinite stars––not a nightmare. Another klaxon and Randy grinds his head into the ground, convulsing at the futility. The rattle sounds like a strong shower.

“Fine, Phil, come,” he says to the sky. “Arroyo trailhead. Two miles east. You can shove me. Kick me. Just. Please hurry.”

A pocket of air billows in his gut and Randy wonders if gas would faze the snake, pictures it flouncing up his chest and tearing across his face, returning to bite him only after the air clears. He’s getting squirrelly and he knows it.

His left foot tingles. It’s falling asleep. Far off, a coyote howls, and Randy senses something, like an ancestral echo: he’s the one who needs to leave. Before both feet go numb. Tick, tock, he’s on his own with this. Alone. He’ll take his time, he decides, the patience of a glacier. The rattle buzzes like his Cannondale’s rear hub, as if the snake agrees.

One tooth at a time he carefully unzips the bag to his hips and digs his elbows in and slowly—slowly—raises his torso. He eases his left foot back, knee bent, and grounds his heel for stability. Pain lances across his instep as his foot awakens. The snake remains coiled around his right ankle. He bends that knee slightly and flexes his foot back and forth repeatedly, rhythmically. When his calf begins to quiver he pleads, “Hey Siri, let me out, and you keep my bag. Promise.”

“You’ll need to unlock your iPhone first,” says the other Siri.

At that, the diamondback uncoils and threads into the spot where Randy’s left foot had been. Randy rises to his palms and cranks out, elbow buckling, wrist searing. He scrambles clear and, stiff and numb, pulls on his Levi’s and boots. Then he lumbers to his phone and uses its flashlight to find a rock, saucepan sized. He grabs it to bludgeon the snake, but a klaxon startles him.

Rock in one hand, he thumbs to the last text: U better be DEAD.

The sleeping bag is silent, placid. Randy holds the rock over his phone and considers its cost. The hassle of replacing it. Adjusting the rock’s position, he contemplates upgrading to a better camera and boyfriend and, hell, a new phone number, sloughing it all…and lets go of the rock, not a deliberate action but a refusal to hold on, willful neglect or careless disregard as lawyer Phil might argue. The phone crunches. Randy grunts and jumps on the rock and the phone crack-cracks. Bending, he scoops the scraps and shards and the phone itself—battered and bent, screen crazed—and slips it all into his pocket.

He turns around. “Hey Siri, enjoy the bag.” Then he puts one foot ahead of the other for the two miles back to his pickup and blinks a smile each time the phone scraps rattle in his pocket.

Joe Cary lives with his family outside of Philadelphia. His work has appeared in One Story and Monkeybicycle and received a Special Mention in the 2020 Pushcart Prize anthology. He test-markets random phrases on Twitter @JoeCary5150. 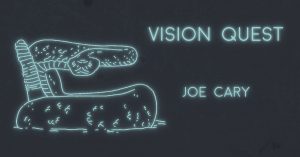 Read Next: TO BE OR NOT TO BEFUDDLE by Brad Baumgartner