At a time when real life is crushed into an acronym, IRL, to accommodate social media, texts, curated accounts, all I crave is something real, someone to talk to, my father’s voice, my mother’s strength. Dani was annoyed that her father sent her a text asking how she was doing, as if the weight of their collective damage could be written with thumbs. Knowing he won’t answer your phone call, you text back fine not explaining how you got fired for taking too many days off, caring for a woman he once loved.

A strong memory of color. I’m driving to the hospital to visit my mother with Hey Jude playing on the radio so that when I enter the lobby of broken people my head is filled with begging: Jude, don’t be afraid, Jude, don’t let me down, Jude, take a sad song and make it better, and I think for a second I’ll let her into my heart so it can beat for two, like all those years before, but I don’t go to her. Instead, I pretend I’m there to see someone else. I say to the front desk, Maternity ward, please. My sister just gave birth. And somehow, I end up staring at babies fresh from the womb, bound in white hospital blankets, striped pink and blue and yellow, brushstrokes of blood and cream-colored mucus still streaked across their brow, and I wonder what it’s like to be that new, to open my eyes and see the world for the first time, to recognize my mother through static. I blink in the rich colors of life, until I’m kicked out and treated like a baby thief, like death visiting.

A time of anger or fear. She sits up, tubes scattered about, says, Dani, don’t be angry. But Dani cannot help herself. She vacillates between sympathy and disgust, looking at the slices across her mother’s veins, the dissection of life and death like the tree that fell on the roof of Dani’s childhood home, nearly missing her, her mother and father on one side, she on the other, and how her mother’s voice was a bridge cutting through wind and rain. Her friends console her, tell her she’s stronger than her mother, implying her mother is fragile and weak, not made for this world, but she doesn’t believe any of those words or explanations, only that some things cannot be explained, which is to say, everything human.

A ladybug crawls across your chest . . .  Its wings, tucked underneath its brightly dotted shell, spill out, like her shirt you brought from home, coming through the zipper of her pants as you and the nurse get her dressed, before she is released from the hospital with a stack of papers on suicide prevention, group therapy, interventions, substance abuse hotlines, and bills to add to the bills you haven’t paid. She will not let you fuss over her anymore she says, but the shirt coming out of her front zipper is a bookmark you save for later when your eyes are heavy, humming Hey Jude, coming undone, the speckled night crawling across your chest.

A man asleep in a car. Make it funny! Make it scary! But all you see is a reckoning, a knife placed squarely in his chest and the taste of blood waking inside you. You write about the twist. You write about your father leaving you both, leaving you caretaker, littering your childhood with each curve of road. You rip it all up and write fantasy, a Lord of the Rings knockoff where you are the hero, your father is the villain, and your mother the damsel to be saved. But how do you save someone from themself? You forget about salvation, make the car drive off a cliff, a man asleep at the wheel, a daughter looking over the edge, a mother who becomes her own hero.

A time when you were desperate or diseased.

A time when you were grateful and knew love.

A time when all the triggers buried in your chest did not require a key.

Sabrina Hicks is a writer who enjoys all points of view and the occasional writing prompt. Her work has appeared or is forthcoming in Split Lip Magazine, Lost Balloon, Bending Genres, Barren, Matchbook, and other publications. More of her work can be found at sabrinahicks.com. 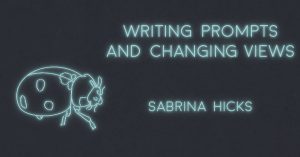 Read Next: TURNS OUT, IT WAS BONE by Mieze Zuber