WITHOUT YOU, I’M EVERYTHING by Felicity Fenton

They boasted about busyness. Their kids, their houses, their husbands. She was busy felting socks for refugees. They were busy driving sports utility vehicles. She was busy searching for working pay phones so she could call her grandmother and tell her she had been places. They were busy applying lipgloss on southern California beach chairs. Their busy sweat stained tunics. Their busy slammed into parked hatchbacks. Their busy stubbed toes while shoving laundry into the mouth of a machine.

“Seems like you’ve been doing a lot!” they would say. “We like all of your pictures. You look skinny.” Their happiness was skinny. She would see them smiling for the camera from steering wheels and quickly close her browser window. She was bored by their contentedness, embarrassed by their stodge. Coffee franchises were responsible for their poor taste in music. Syrupy melodies. Always the same album, the same song. “Where did you get that jacket? I’ve been looking for something similar.” they would ask. She wouldn’t remember on purpose.

They were old. She wasn’t as old. But only by a few years. This was a point of contention among them. She still had a chance to escape the blow of societal ostracism. Men still called to her from construction sites. No one wanted to take their clothes off anymore. Not with the lights on. They had complained about losing out on orgasms to detached partners, so she taught each of them how to fuck couch arms via webcam.

Where had she moved from? Who were her relatives? How long did it take to brine pork chops? What was her first kiss like? They wanted answers.

She fled Brooklyn after being terrorized by a dead rock star. Her mother was related to a Tunisian farmer who married a Sicilian gypsy who died on a boat on the way to America. Her father was adopted by eco-warriors who lived on aloe vera and cashews. It took twelve hours to brine pork chops if you wanted them to taste good, but she was sure there were other cooks who could do it in less. Her first kiss was with her cousin, a piece of bubblegum, and a mirror. They were lovers for years.

What did she do for fun? She collected shades of red from the caskets of dead dictators. She took photos of strangers entering and exiting convenience stores. She pinched blackheads from the base of her nose.

She wrote Uncle Ho themed postcards to her aunt and never mailed them:

My pants won’t stay up. I bit my nails to nubs, again. My spine feels stacked in reverse. I walk backwards to keep up with my longing. Sorry to disappoint you. I’ll try better next time.

Sadness was common. Mornings were the worst. Instead of turning off her alarm she would cover her head with a stack of pillows and shove her earplugs in further. She would roll from bed without using her arms or legs, thudding the cold tiles with her face.

They would come to her house and tell her about their trips to southern California beaches. How tan their arms were, how taut. “We talked about how lost you are.” they would say. “Maybe you should try accounting?” She would offer them tea, without milk or honey.

She wore baggy t-shirts while racing Olympian ghosts on treadmills. When she looked in the mirror she measured all parts. Her neck, her belly button, her thighs. Her role as human, daughter, beast. She lost to all measurements, then won them back later with a hit of weed.

When she ran out of money she suggested they fund her adventures to a disappearing island. There wouldn’t be status updates or pictures, but it would be real. It was her next big thing. There would be a book, a movie based on a book, and a book based on a book. She would float outside of herself. Nothing would penetrate her wet suit.

She returned unscathed, mostly shiny. No longer longing. Stronger in the hands. When they reached for her she sidestepped into another room, looking for a missing sock, a glass of water, a bobby pin. They were impressed without her having to do much of anything to impress them. Dust free corners said it all. The pork chops were succulent. She paid them back, plus interest, then demanded they remove their clothes.

Felicity Fenton’s stories and essays have been featured in Fanzine, Split Lip Press, Wigleaf, The Iowa Review, Pidgeonholes, The Denver Quarterly, The Masters Review, Passages North, and others. Her book, ‘User Not Found’ was published by Future Tense Books in December, 2018. She lives in Portland, Oregon. 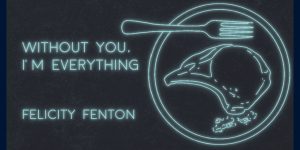 Read Next: EVERYONE TO BLAME by Jason Teal