That means a tall man can lie down only in one direction.

How do we measure a room? A living space? I don’t know the square footage of my Minnesota apartment. Only that it’s the smallest in this building, maybe the smallest anywhere in town. But when my neighbor moved out and my landlord offered me his place (“It’s a lot more spacious, maybe $10 more a month.”), I didn’t even look before deciding against it.

You never know when you’ll need that money. For supplies. For an extra stiff drink to soften the edges. For an emergency ticket out of dodge.

When I moved to Minnesota in 2017, my goal was for everything I brought to make the trip in my Ford Taurus. For the two years before a friend insisted I take his mattress, I slept on a folding cushion about four inches thick topped with a Japanese style futon.

This was an improvement on my previous setup.

Every so often I see a social media post from a woman bemoaning the state of single men’s sleeping situations, insisting no self-respecting woman would sleep with a man so close to the floor.

This is true most of the time.

Which is good enough odds.

What are the odds of dying in a natural disaster? Of a tornado hitting this building that lacks underground shelter? Of a big enough hunk of destiny hurtling through the blackness of space and striking us? Of dying in a flu pandemic? Of falling in a lasting love before one of the other odds hits you?

Some estimates say the odds of the great Cascadia earthquake, which would obliterate much of the Pacific Northwest of the US, are as high as one in three in the next fifty years.

Other dangers have longer fingers.

How do we measure space in one’s mind? Span of attention? Capacity to remember details? The ability to hold onto three or more emotions about a single time and place? Or maybe the intervals between each nervous refresh of one’s news feed.

What I remember in March 2011: the rocking buildings in downtown Shibuya, Tokyo.

Images of a tsunami sweeping cars, homes, and people out to sea.

Sitting on my bed in Meidaimae, Tokyo, watching a news ticker drip updates, like irradiated fluids into the water supply, on an unfolding power plant catastrophe.

Google searches:
How far south is Yokohama from Tokyo?

Potassium iodide tablets how many safe?

Tick, tick, update: That jolt that nearly threw you from your bed was an aftershock. Stay tuned for more. And watch your head—this room is only one tatami wide.

I tracked down the share house where I lived in 2011. It’s under new management. The room is almost the same, new little rug, bed on the opposite side. But they’ve added a new desk: The same IKEA one now in my Minnesota apartment.

I imagine I’m writing at a desk linking these times.

Or maybe I’m under the desk.

Japan knows about earthquake preparedness. Myriad PSAs lectures about what supplies to keep in case of an emergency, how to prevent the fires that devastated Kobe following its 1995 quake, the reasons for opening doors (shifting buildings can cause them to stick shut, trapping you inside) and shielding one’s head under desks. But hiding under desks always reminds me of Cold War era safety drills.

Put your head under your desk (and kiss your ass goodbye).

During a quake in central Japan in 2016, although I opened a door, nobody in my office took cover. Everyone sat in place, stunned as the building rattled.

Even as the floor moves under you, it can be hard to believe it’s really happening.

In February 2020, I started prepping food.

I’m not one of those preppers, stockpiling food and weapons in cellars, training for the post-apocalypse. But I had seen videos emerging from Wuhan, China of men in hazmat suits patrolling streets, armed with semi-automatic rifles.

How do you protect against what you can’t see?

There is an Early Earthquake Warning system in Japan. Your cell phone, normally always on silent mode, quivers against a desktop, announcing in Japanese: “Earthquake, earthquake,” and maybe the shock and your translation to English cost a lengthy moment processing this information, shaving away precious seconds before the earthquake hits.

Near the epicenter there’s no warning.

Too much warning—and too much time to think—are their own kinds of danger.

The worst thinking is about what the air contains. About the delay between filling your lungs and the first onset of malignant symptoms.

Panic is a problem. Frightened people hoard supplies, take rash action, flee countries. Information travels more quickly than ever before. But what do we trust? The noise to signal ratio makes understanding impossible in crises where hours, minutes, even seconds can count.

More bad thinking: To prevent panic, are those who know withholding truth?

What could you even do?

Recently supermarkets shelves have been plucked bare. This started the first week in March with cleaning supplies. I took a photo where disinfectant wipes and sprays used to be and posted it to my Facebook with the caption, “Is it starting?” Several people reacted with a laughing emoji. This was my second to last prepping trip before President Trump addressed the nation. I made my last one as soon as the address was announced.

Should I have said something more to warn other people?  I wasn’t even sure myself how much credence to lend my paranoia.

Normalcy bias: The psychological tendency for people to believe that events will proceed according to how they have before. Leads to underestimating odds of disaster and severity of consequences.

I wonder how long until fear supplants normalcy. How long the fear from one time period will shape the rest of my life. Will I one day perplex a nurse with my habit of disinfecting groceries? Will they find my baton?

I’ve lost most of my photos from that brief, stressful time when I first tried to move to Tokyo.. The photos left are of my small room in Meidaimae. A tiny folding chair and desk wide enough for a laptop. The bed, the small shelf, the clothing rack where my ill-fitting Goodwill suit hung. The house’s shared kitchen area, the shower room, the toilet. Outside, a narrow alleyway with high, concrete walls. Streets with seemingly infinite twists and turns in which I’d become briefly lost. A sign hung by a playground that reads in Japanese, “If you think it’s suspicious, run away.”

Then there are the photos of food.

This was the kind of junk I ate, and even if I had felt comfortable cooking in the shared kitchen, I didn’t really know much about cooking, especially working from local Japanese ingredients. This hadn’t been an issue when I first moved in. Daily trips to the center of town to buy a few items were part of my routine, orienting myself to Tokyo. After the earthquake, store shelves were empty. Everyone was panicked, and I was perhaps the least prepared person in the whole city to know which items to acquire and how.

The other night, not knowing what else to do, I inventoried every scrap of nourishment in my cupboards and fridge. It all fit on one note card.

In a thread on items to stockpile, I learn that “deens” is prepper slang for sardines.

But I don’t buy any deens.

I have many reasons for gratitude. I can work, at least for another month, from home, which is warm and, at least for now, not shaking. There is food, and internet, and a steady supply of power. There is a lock on my door.

If I weren’t alone in this room, the other person and I could keep six feet between us with our backs against the wall.

Tick, tick, update: A stay at home order starts tonight. I’m way ahead of the game.

Update: I was, am, and will continue to be socially distanced.

Update: I’m at the desk in Meidaimae.

Update: I’m at the desk in Minnesota.

Update: I’m under the desk.

James Sullivan has split his adult life between the American Midwest and central Japan. Currently in Minnesota, he is at work on a short story collection, a series of essays, and a novel. You can find his work most recently in Fourteen Hills and Inscape Magazine. Tweet him @jfsullivan4th. 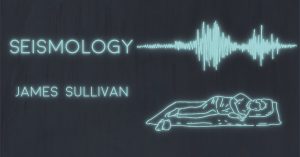